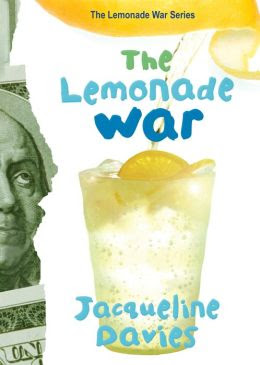 I enjoyed this book even more the second time around. (I first reviewed it in October 2007). The Lemonade War is the story of two siblings--Evan and Jessie--and their week-long war over who can make the most money selling lemonade. Officially, this war is all about WHO can earn $100 in just five days, the last five days of summer vacation. The winner takes it all. If he wins, he gets to keep his earnings and her earnings. And vice versa. He dreams of an iPod. She dreams of giving money to an animal rescue league.

Until the last week of summer, these two kids had had an enjoyable summer, with plenty of time together and plenty of time to themselves. But when a letter comes from the school alerting the mom to a big change, well, Evan loses it. Evan thought it was bad enough that his sister was skipping a grade, that she would be in the same grade--fourth. NOW he learns that they will be in the same class. (The school has gone from two fourth grade classes to one.) Evan and Jessie react very differently. Evan focuses only on his weaknesses: he's horrible at math, he doesn't want everyone to know that his sister is SMARTER and BETTER than he is. Evan may see Jessie that way, but Jessie sure doesn't see herself that way. Jessie has trouble reading people; she doesn't always connect the dots between what people say and what people mean. Most of her second grade year, she was miserable, absolutely miserable. There was even a "We Hate Jessie" club led by a group of particularly mean girls. Jessie is worried that she'll have just as much trouble in fourth grade socially. Evan, she feels, is oh-so-comfortable and oh-so-confident. He never seems to have trouble talking to anyone. If only she could be like him!!!

One positive thing about this war, in my opinion, is that it challenges both Jessie and Evan to rise above their weaknesses. Evan must face his fear of math, of figuring out HOW to do "story problems" in real life. With Evan, readers get to see the practical side of *why* math is important. Jessie faces her fear of talking to people, of taking the first steps, of making friends. She seeks out girls who will be in her class, and, she makes allies, in a way.

The Lemonade War is, in a way, all about problem-solving, of meeting life's problems with determination. That and it's about love and hate.

I really liked the character of Jessie. I did. I liked how she clings to Charlotte's Web. I liked her spirit, her determination. Not that she was perfect. Not that she didn't make mistakes. But they both made mistakes.

I would definitely recommend this book!

Becky, this sounds so good. I enjoy children's fiction very much at times.