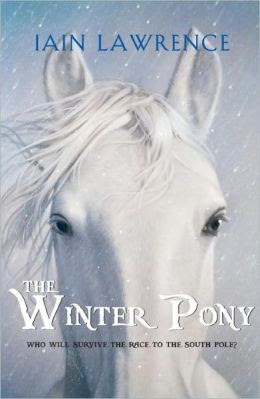 By the time I was halfway through The Winter Pony, I knew I had made a mistake, a big mistake. It isn't just that all the animals die, the ponies, the dogs, and lots of other Antarctic animals that were killed for food or fur, or both. It isn't just the fact that almost all the human characters die too.

I think it's the fact, and this is purely subjective on my part, that it was all so pointless. What could possibly be heroic or noble about starving to death and/or freezing to death? For what did these men risk their lives? For the glory of man? For pride? The men had a choice. They, for whatever reason, were excited and motivated and aware of the risks and hardships. The animals, well, they had no choice at any point. The animals were essentially doomed from the moment they were selected to be a part of Robert Falcon Scott's quest, his mission, to be the first to the South Pole.

Why am I focusing on the animals instead of the men? For the simple fact that this book does. The Winter Pony is told through a pony's perspective. The pony hero is James Pigg. The novel opens with James Pigg free and running wild, happy and innocent. It ends with him being shot and fed to the remaining dogs and men. (The men, the dogs, the ponies, all shared the same fate, it was just a matter of when.)

The author seems to like and respect Robert Scott, and has sought to tell the story honestly for better or worse. He does point out that big mistakes were made by Scott on his journey, that the story could have had a different ending, if Scott had made different choices, better choices. One of the mistakes is that Scott failed to push the ponies hard enough at the beginning. He had planned to create a supply cache, "One Ton Depot" at a certain degree, he stopped short of his goal for the sake of the ponies. On his return journey, he never came close to reaching the much-needed supplies that would have saved his life and the lives of his men. If he had stuck to the original plan, then he would have reached his supplies. There were other mistakes made as well.

There was nothing in Ian Lawrence's novel that made me like or respect Scott.

The Winter Pony stays relatively close to the facts. James Pigg's part in the story is stretched and expanded to tell more of what it was like to be one of twenty (or is nineteen?) ponies on the expedition.

The narrative switches between the pony's perspective AND an omniscient narrator that shares plenty of information.
© 2014 Becky Laney of Becky's Book Reviews
Posted by Becky at 10:54 AM

I ended up not purchasing this because it was SO sad. I did like Kerr's Winter Horses, though. It seemed to have a bit more hope in it, plus a very interesting twist on WWII fiction.