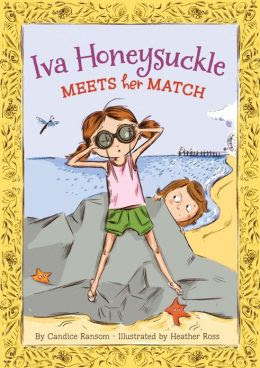 Sissy One and Sissy Two are brave in Iva Honeysuckle Meets Her Match. These two sisters head to the beach for a week-long vacation with all six children.

Why brave? Well, Iva and Heaven and Lily Pearl and Howard aren't exactly calm, predictable, obedient children. Though in Howard's defense, he is led by Lily Pearl most of the time. In the first chapter book, Iva Honeysuckle Discovers the World, Lily Pearl was in a witchy phase. (One of her favorite games was playing Naked Witch which involves running wildly around the house: naked, of course.) Howard was a ghost, I believe, in that game. In the second book, Lily Pearl has moved on to playing BRIDE. And Howard, of course, is her victim-playmate. But as it turns out, all six children take a notion to be disobedient and break all the rules set for them by their moms.

Summer vacation. One week. Plenty of adventures and misadventures. They meet new (and interesting) people. They try to manage their own spending money. They try to problem-solve.

Iva, poor dear, has a time of it during vacation! She sees a SEA MONSTER, takes her mom's camera, DROPS it into the ocean, doesn't confess and lets her mother search for it all week long. She feels bad--really bad--so then she starts trying to SOLVE this problem all on her own, how to make restitution AND how to establish proof of the sea monster.

Plenty of action and fun in this one. And the characters, while far from flawless, continue to be entertaining.

I would definitely recommend this one!