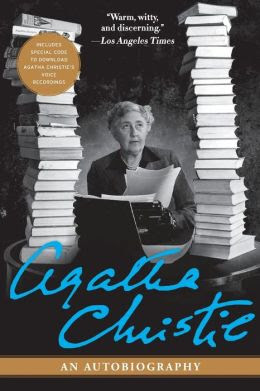 Agatha Christie's autobiography has been on my tbr pile for years now. I have looked forward to reading it for so long! I must admit the length had me a little intimidated. But once I started reading this one, I found myself completely absorbed in it. It is truly a fascinating read cover to cover. I think this one could prove appealing to a variety of readers.

Do you love history? I found Agatha Christie's Autobiography to be fascinating. This book is rich in details. Readers learn in great detail about her family and her growing up years. What Christie is describing is a way of life, and the way she saw the world around her. Her thoughts on her parents, grandparents, siblings, the family servants--the cook and the maids and nannies. You get a real sense of what it was to be a child (and teen) growing up in England in the 1890s and 1900s. She was "out" (ready to date) a year or two (or even three) before World War I began.

Are you interested in World War I? in World War II? Christie details what life was like during the war years. She was a nurse for a great part of World War I. She also assisted in dispensing drugs. She fell in love and got married during this time. During World War II she again did her part in the war effort. I believe volunteering in a hospital. She was in and around London during the War. She recalls how she rarely (if ever) took shelter during the raids because she was afraid of being buried alive under all the rubble. She had a grown daughter by that point. A daughter who fell in love, got married, and had a child during this time.


England was at war. It had come. I can hardly express the difference between our feelings then and now. Now we might be horrified, perhaps surprised, but not really astonished that war should come, because we are all conscious that war does come; that it has come in the past and that, at any moment, it might come again. But in 1914 there had been no war for--how long? Fifty years--more? True, there had been the "Great Boer War," and skirmishes on the Northwest frontier, but those had not been wars involving one's own country--they had been large army exercises, as it were; the maintenance of power in far places. This was different--we were at war with Germany. (257)

Are you interested in archaeology? in world-traveling? She spends a good deal of time recalling her travels around the world. She accompanied her first husband on an extended trip--covering several continents. (She left her (quite young) daughter with her mother and sister.) After her divorce--he fell in love with another woman and blamed her for it--she traveled on her own. On one of her trips to the Middle East, she met the man who would become her second husband. He was an archaeologist. While she did not stay with him the duration of all of his digs, she accompanied him on some, and visited on others. Readers learn that Christie LOVED, LOVED, LOVED to travel.

Are you a rehab addict? Christie loved looking at houses, buying houses in need of repair, fixing them up, renting them out, and selling them. She owned many properties at various points in her life. I believe the book said she owned eight during World War II. The book talks about her remodeling and redesigning houses.

Are you interested in writing, in her writing life? You'll find plenty to delight you within her autobiography. She talks about different sides of her writing life. Her novels. Her mystery novels. Her plays. Her short stories. Her poems. She talks about her mistakes and successes. Readers learn about which books she liked best and which book she really, really hated!


It was while I was working in the dispensary that I first conceived the idea of writing a detective story. (289)

People never stop writing to me nowadays to suggest that Miss Marple and Hercule Poirot should meet--but why should they? I am sure the would not enjoy it at all. Hercule Poirot, the complete egoist, would not like being taught his business by an elderly spinster lady. He was a professional sleuth, he would not be at home all in Miss Marple's world. No, they are both stars, and they are stars in their own right. (502)

Do you love to read? Christie shares her thoughts on her favorite writers and books!

I want to emphasize the fact that you do not have to love mysteries in order to find this autobiography of a mystery writer fascinating! I marked so many passages that I wanted to share with you. Too many to actually share. It would overwhelm any post. So just trust me, read this one!

I will choose a quote which happens to bring to mind a certain song from Frozen.


One of the first things that happens when you are attracted to a man and he is to you is that extraordinary illusion that you think exactly alike about everything, that you each say the things the other has been thinking. (228)

Hi Becky, I also enjoyed this book so much!

I didn't know Agatha Christie wrote an autobiography. Cool! I've been doing some research on WWI Britain and I have a long term fascination with WWII Britain, so this might be perfect for me.

I also love to travel and want to write and would love to fix up the house. Now, I'm wondering how the heck she had time to do all that?