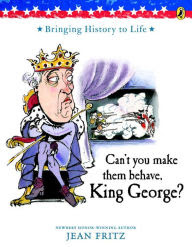 I am so glad I read Jean Fritz's Can't You Make Them Behave, King George? I found this one to be a delight. And not just because I happen to love Horrible Histories' Born 2 Rule. (I should probably make that love, love, love, LOVE. I love Horrible Histories, the show in general, and the songs very, very much.) I've almost always enjoyed studying British literature and British history more than American. Though in the case of this book, you get a bit of both!

Can't You Make Them Behave, King George? is about the reign of George III. How he came to the throne, what kind of king he was, what he was remembered for, etc. A lot of the focus is on the conflict, the war, with the American colonies. But it isn't just about the American Revolution either. Plenty of attention is placed on the royal family which I loved.

This biography is definitely for mid-to-upper elementary students. A good read aloud for first grade it isn't! There is a lot of text per page, but, there are also plenty of illustrations. And the illustrations are by Tomie dePaola. Some are in color, others are in black and white. But the important thing is that there are illustrations. I've mentioned it before, but, it's worth repeating. When I had to choose a nonfiction book for report, required reading, I decided which book based on the length and the number of illustrations. This one would have been well received by me!

I read a reprint edition that came out circa 2009. It was originally published in 1977.

I really like Tomie dePaola, but didn't know about this book. When I was in London, I got such a kick every time that George III was mentioned without a connection to our Revolutionary War. From American History, I would have guessed that he had no other role to play!