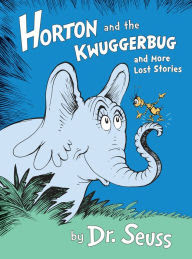 Horton and the Kwuggerbug
First sentence:


It happened last May, on a very nice day
While the Elephant Horton was walking they say,
Just minding his business...just going his way...
When a Kwuggerbug dropped from a tree with a plunk
And landed on Horton the Elephant's trunk!

Premise/plot: Horton makes a deal with the Kwuggerbug, but, it's a deal that he comes to regret making because the Kwuggerbug isn't exactly honest and fair. The deal is this: The Kwuggerbug will give Horton half the nuts off the Beezelenut tree, if Horton will carry him to the tree on his trunk. But a deal is a deal, right? Will justice be done?

My thoughts: This is the "second" Horton story. It was published in 1951 in Redbook several years before Horton Hears a Who. Horton is just as LOVABLE as always. I love, love, love Horton as a character. And this one is just as great as Horton Hatches the Egg and Horton Hears a Who! Definitely not as well known perhaps. But if it had been published as a book in the 1950s, no doubt in my mind that it would be just as beloved.


"Young man!" said Miss Block. "It's eleven o'clock! This school begins promptly at eight-forty-five. Why this is a terrible time to arrive!"

Premise/plot: Marco Comes Late is the sequel to And To Think That I Saw It On Mulberry Street. "Something" is happening on Mulberry Street once again, and this time it's on his way TO school.

My thoughts: This is a much shorter adventure for Marco. But I liked it. I don't think it would have been "enough" for a book of its own perhaps. But it isn't a disappointment either. It was originally published in 1950.


The job of an Officer of the Police
Is watching for trouble and keeping the peace.
He has to be sharp and he has to be smart
And try to stop trouble before it can start.

Premise/plot: This little story is all about TROUBLE and how it can start out small but grows and grows. That's what the "moral" of it is, I suppose. But it is GREAT fun in the telling. And it's set on Mulberry Street.

My thoughts: I loved, loved, LOVED How Officer Pat Saved the Whole Town. This story also appeared in Redbook in 1950. Seuss signed a contract to have Officer Pat published as a book, but it was later replaced in the contract with the publisher with Yertle the Turtle and Other Stories. Here's one little bit from the story:


The trouble with trouble is...trouble will spread. The yowl of that cat will wake Tom, Tim, and Ted, Those terrible triplets of Mrs. McGown. Then they'll yowl a yowl that'll wake this whole town. When trouble gets started, it always starts more! Those kids with their racket and ruckus and roar will frighten the bird, and the birds will come flapping down Mulberry Street with a yipping and yapping!

The Hoobub and the Grinch
First sentence:


The Hoobub was lying outdoors in the sun,
The wonderful, wonderful warm summer sun.
"There's nothing," he said, "quite as good as the sun!"
Then up walked a Grinch with a piece of green string.
"How much," asked the Grinch, "will you pay for this thing?"

Premise/plot: The Grinch is trying to sell the Hoobub a piece of string....will the Hoobub be deceived by the Grinch's clever use of words?

My thoughts: It may be short--just TWO PAGES. But don't underestimate it's cleverness. Not that I love, love, love it. But it worked for me!

Have you read Horton and the Kwuggerbug and More Lost Stories? Did you like it? love it? hate it? I'd love to know what you thought of it! 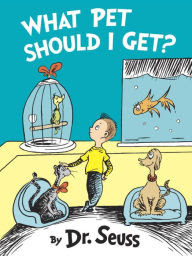 Premise/plot: Siblings--a boy and a girl--have trouble deciding which pet to get. Their parents said, "yes" to one pet, but, not to two, or, three, or four. The problem? The kids have only to see an animal in the pet store, and, then they WANT it. This book is all about having to make up your mind...


Dr. Seuss's first "pet" was a brown stuffed toy dog given to him by his mother. Ted--whose real name was Theodore Seuss Geisel--named it Theophrastus. Ted would keep Theophrastus for the rest of his life. The dog was often perched near his drawing board. In 1991, just days before his death at the age of eighty-seven, Ted gave Theophrastus to his stepdaughter Lea Grey. "You will take care of the dog, won't you?" he asked her.

Have you read What Pet Should I Get? Did you like it? love it? hate it? I'd love to know what you thought of it!

I'll be posting a list of my TOP TEN books by Dr. Seuss later this week.