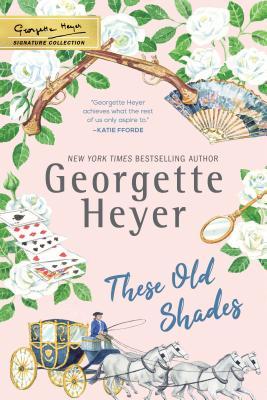 First sentence: A gentleman was strolling down a side street in Paris, on his way back from the house of one Madame de Verchoureux.

Premise/plot: These Old Shades has a lively, impulsive, honest heroine in Leonie.  The hero, Justin Alistair, is equally unforgettable, a man with a horrid reputation with the ladies. (Among other things, he's even KIDNAPPED a lady in an attempt to get her to marry him.) He's not called 'devil' for nothing. But try telling Leonie that Justin is anything but an absolute angel! You see, he rescued her from her mean brother, he bought her. Of course, even that isn't quite what it appears to be. For Leonie was then posing as, Leon, a young man. (She'd been living as a boy since she'd turned twelve.) So Avon first meets Leon, likes the red hair and dark eyebrows, and decides the boy would be a good page. It would be useful to him to have the boy in his household...

There are also hints of villainy throughout These Old Shades as Justin prepares to use Leonie as a weapon against one of his own enemies...

My thoughts: These Old Shades has an intriguing opening and a marvelous conclusion. (The last seventy-five pages or so are just wonderful!) There are some lively conversations in between, of course. As Leon is taken to England and transforms into Leonie. As Avon tries through two women (his sister, his cousin) to teach her how to be a lady, how to dress, how to walk, how to talk, what to say, and most importantly what NOT to say. Readers are introduced to Justin's family: his sister, his brother-in-law, his brother, his neighbors, etc. Rupert, Justin's brother, becomes a playmate of sorts for Leonie. Both being immature, teasing, silly.

These Old Shades is my mother's favorite novel by Georgette Heyer. It isn't necessarily my favorite. But I do enjoy rereading it very much.


I found out yesterday that Mom has NEVER read The Black Moth. I was a bit shocked because I thought she'd read every Heyer novel! I am curious to see if she makes the connections between These Old Shades and The Black Moth and if she reaches the same conclusion I did.

"Vengeance?" Hugh leaned forward. "I thought you disliked melodrama, my friend?"
"I do; but I have a veritable passion for justice."
"You've nourished thoughts of--vengeance--for twenty years?"
"My dear Hugh, if you imagine that the lust of vengeance has been my dominating emotion for twenty years, permit me to correct the illusion."
"Has it not grown cold?" Hugh asked, disregarding.
"Very cold, my dear, but none the less dangerous."
"And all this time not one opportunity has presented itself?"
"You see, I wish it to be thorough," apologized the Duke.
"Are you nearer success now than you were--twenty years ago?"
A soundless laugh shook Justin.
"We shall see. Rest assured that when it comes, it will be--so!" Very slowly he clenched his hand on his snuff-box, and opened his fingers to show the thin gold crushed.
Hugh gave a little shiver.
"My God, Justin, do you know just how vile you can be?"
"Naturally: Do they not call me Satanas?" The mocking smile came; the eyes glittered. (27)

"Remind me one day to teach you how to achieve a sneer, Hugh. Yours is too pronounced, and thus is but a grimace. It should be but a faint curl of the lips." (88)


"It is always wise to believe the worst of me, Fanny."
"I confess I don't understand you, Justin. 'Tis most provoking."
"It must be," he agreed.
She drew nearer, coaxing him.
"Justin, I do wish that you would tell me what is in your mind!"
He took a pinch of snuff, and shut the box with a snap.
"You must learn, my dear Fanny, to curb your curiosity. Suffice it that I am as a grandfather to that child. It should suffice." (122)


"Did you think we had eloped?" Rupert inquired.
"That explanation did present itself to me," admitted his Grace.
"Eloped?" Leonie echoed. "With Rupert? Ah, bah, I would as soon elope with the old goat in the field!"
"If if comes to that, I'd as soon elope with a tigress!" retorted Rupert. "Sooner, by Gad!"
"When this interchange of civilities is over," said his Grace languidly, "I will continue. But do not let me interrupt you." (196)