87. The History of Henry Esmond, Esq 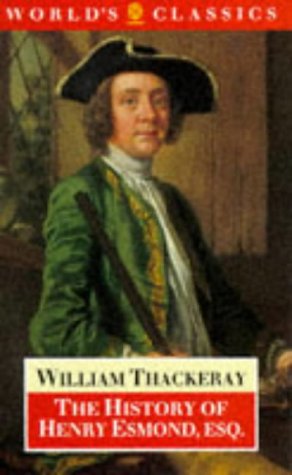 First sentence: When Francis, fourth Viscount Castlewood, came to his title, and presently after to take possession of his house of Castlewood, county Hants, in the year 1691, almost the only tenant of the place besides the domestics was a lad of twelve years of age, of whom no one seemed to take any note until my Lady Viscountess lighted upon him, going over the house with the housekeeper on the day of her arrival.


Premise/plot: Henry Esmond is an orphan being raised by his distant cousins, Francis and Rachel Esmond. He is brought up with their two children Beatrix and Frank. He is in that awkward space between servant and adopted son. The moods of this couple vary greatly. He is either greatly beloved or scorned and rejected. For example, when the plague comes--I believe it is the plague--he is REJECTED because he's blamed for the family's exposure to it. The couple's relationship is never quite the same after that--the plague--and the happy marriage becomes miserable. Of course, Henry is to blame. But the two are determined to see him educated--and at Cambridge University. While their moods are completely volatile and unreliable, Henry feels only love, loyalty, and gratitude. Perhaps to the point of being ridiculous?

(Henry comes from a long line of Stuart-supporters and Stuart-defenders. In fact, I believe, his father and grandfather both died in battle because of their allegiance.)

So when Henry isn't being a soldier--he's a Colonel by the end of the book--he's madly, truly, deeply in love with the unattainable, cold-hearted Beatrix. That is until he isn't. Who's the love of his life? Well, in a surprise twist that comes on the last page or second to last page, it's revealed he marries his FOSTER MOTHER. (Never mind that he's spent probably ten to twelve years at least thinking of her as HIS MOTHER.)

My thoughts: I don't know what's worse being bored to death with all the war talk (though, the fact that he had encounters with famous men of the time like Richard Steele and Jonathan Swift, and others, etc. was slightly interesting) OR being grossed out by the fact that he falls in love with his mother. Yes, she's not technically his mother--biologically. But she is his foster mother, adopted mother, recognized guardian.

congrats Having a successful ebook is a sure shot way to get a publisher. Start with getting 100+ reviews for your book using honestbookreview dot com At this level, your book will grab more eyeballs and get more sales. Then, try to get the attention of a literary agent. Having a proven book makes the process easier.