11. Max and the Spice Thieves 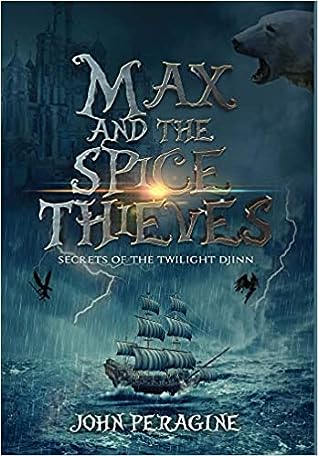 First sentence: “Max,” Mom said, gently stroking my arm. “Come on, Little Bear, it’s time to get up.” I cracked one eye open—it was still dark. I sighed loud and long. “It’s too early. The sun isn’t even up. Besides, what’s the point?”

Premise/plot: Max and the Spice Thieves is a middle grade fantasy novel by John Peragine. Max, our unlikely hero, stars in this coming-of-age fantasy novel. His father is missing, believed, dead; his mother is missing, possibly dead. All he knows has been turned upside down and shaken. He's keeping company with Captain Cinn, a spice pirate (not to be confused with a space pirate) and his crew...but not for long. Because Cinn is a wanted man. What he didn't expect is that he's WANTED to. But why? Who were his parents? Who is he? How much has been kept secret from him?

Max and the Spice Thieves has plenty of action, magic, and, well, fantasy. It stars plenty of supernatural beings. It might have more than its fair share of coincidences.

My thoughts: This one gets a definite three stars for me. It requires a certain suspension of disbelief. (Which isn't all that unusual for a fantasy novel--children's or adult).

Essentially what you see is what you get. Expect a children's fantasy novel starring a child who meets an assorted and varied cast of helpmates who set out on a mission/quest together. The mission/quest is challenging, as all quests are in fantasy, but the fate of the world depends on it. Fortunately the hero is stronger and smarter and braver than he knows.

If that kind of formula works for you--as an adult or as a child--this book may prove satisfying. I do think children have probably read less fantasy than adults so perhaps they never come across books that feel formulaic? Or maybe the secret is that they just don't care or even love that about a book?

I think we all as individual readers have our own favorite formulas that we just love and adore and can't get enough of. (Mine might be historical romances with marriages of convenience where the husband and wife fall in love after saying I do.)