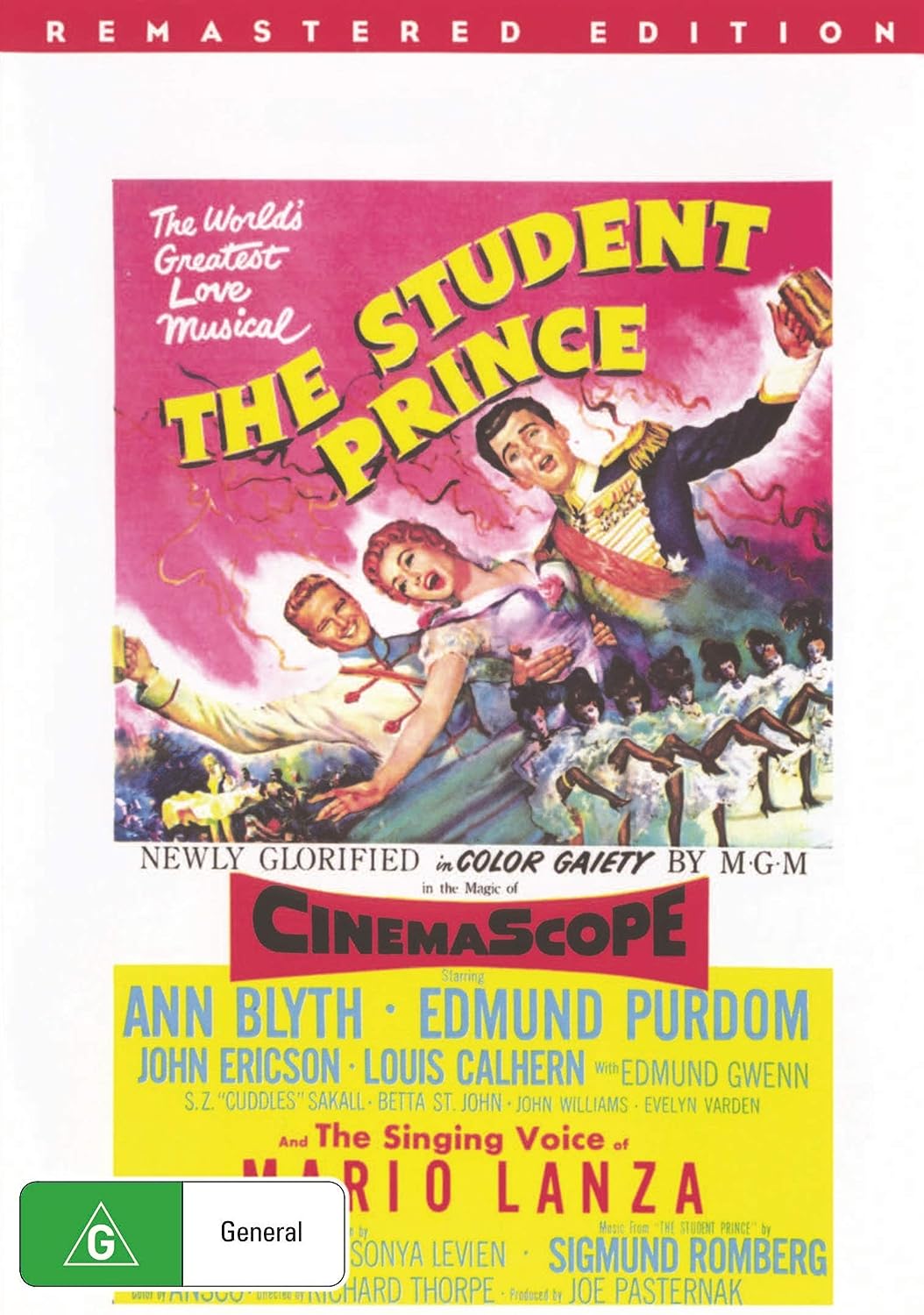 There were several silent films--in both German and English--of Old Heidelberg and/or The Student Prince. The operetta was--again according to Wikipedia--the longest running Broadway show in the 1920s--608 performances to Show Boat's 572 performances.

It was adapted into a musical film in 1954. Mario Lanza provided the voice for the student prince.

I found *some* similarities between The Student Prince and Cinderella. Though I will say The Student Prince is more of an anti-Cinderella tale. Prince Karl Franz, our "hero" is the heir to the throne of Karlsberg (fictional German kingdom). He's all set for an arranged marriage, but his intended bride finds him a bit robotic, cold, uncaring. Deemed to be lacking the important virtue of CHARM, he's sent to attend university/college in Heidelberg. He'll live in an inn, attend classes, and generally mingle with the commoners for however long it takes for him to gain some perspective. Of course, this proves slightly problematic. He falls madly, deeply, passionately in love with the innkeeper's niece, Kathie, who waits on him--and others--primarily serving round after round after round after round after round of beer. (Most of the musical numbers are about drinking, drinking, drinking, and more drinking.) Since their love affair literally can't go anywhere--she's a commoner, he's the heir to the throne--and since he's already engaged to be married--it's a bit "There's No Tomorrow" or "It's Now or Never." When his grandfather (the current king) dies, he assumes the throne, leaves Kathie forever, and is on his way to his wedding. The End.

As I mentioned before this is an anti-Cinderella story as far as I'm concerned. He's an UNcharming prince who does NOT marry a commoner who's in service. Though he may love her, he always must leave her in the end.

I found him insufferable. I yelled at the screen quite a bit. Mainly because he's very hand-sy and trying to force himself on Kathie for the first half of the movie. He doesn't really change what he wants--but she eventually falls for his act after a few love songs where he "croons" in her ear. (Ouch!!!) Perhaps she was attracted to him all along? Maybe she thought she didn't have a choice and she might as well accept her fate? Maybe because her uncle was unsupportive? Maybe because she had nowhere else to go or way to earn a living?

Regardless, I was not swept up into this love story. I thought he was a JERK. It was clearly insta-lust presented as insta-love (well, maybe???). Sees a girl swinging beer around and singing, thinks I must grab her and kiss her as soon as possible. WHAT?!?! Who is she to reject my kisses. I must try again and again and again. I will not take NO for an answer. I am A PRINCE. She will be mine! I will pursue her until she quits this job, goes across the river, follow her to her new place of work, and pester her until she's fired, and then follow her after she's fired and SING, SING, SING, SING until she will willingly accepts my kisses.

Apparently kissing a commoner and drinking beer (lots of beer) with commoners does the trick and he is a forever changed man? (But is he really???? It's not like we know how he is once he's King and married).

I do think it shows how Cinderella might have gone if there had not been magic and a fairy godmother.