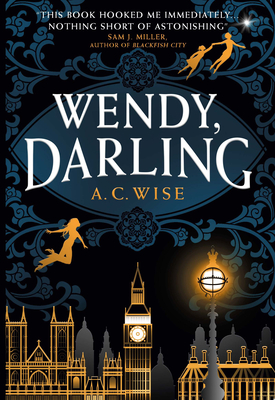 First sentence: There is a boy outside her daughter's window.

Premise/plot: Wendy, Darling is (adult) historical fantasy--essentially a sequel to Peter Pan. The premise itself is simple: how would Wendy's adventures in Neverland impact her--and her family--the rest of her life?!

The what-ifs in this book are fantastic (in my opinion). What if Wendy couldn't forget Neverland. What if her brothers John and Michael grew out of their belief--yes, this happened to us; yes, Peter Pan is real; yes, we visited another realm--but Wendy didn't. What if she spent years--decades--being gaslighted by her family and all those around her. You are delusional. You are making this up. You are crazy. Why are you acting like this? Why can't you get a grip on reality? Why can't you just grow up and be normal. And by normal getting married is definitely part of the whole package.

Another what if explored is what if the Darling parents were on board the Titanic and not among the survivors? What if Wendy had to be the boys' mother in this world as well and not just for pretend? Setting the sequel firmly in the time period of the early twentieth century, that leads to of course the Great War, the first World War. Suddenly this fantasy novel that you've been familiar with for decades comes to life and it's like turning a kaleidoscope.

The book has two--possibly three--time lines going at once. The "present" day where Wendy discovers that Jane has been kidnapped by Peter Pan (who insists on calling Jane "Wendy.") What won't Wendy do to get her daughter back?! Don't anger a mama bear!!! And the "past" where Wendy is being committed to an insane asylum by her brothers. Her time in the asylum is explored as is her friendship with a fellow inmate, an American (or Canadian?) Indian named Mary. The possible third time line (and it's really just a short hop away from the "past" story line) is when Wendy is released specifically because she's agreed to marry a fellow of her brother's choosing named Ned.

My thoughts: If you are looking for a dark (darker) adaptation of Peter Pan, then this may satisfy. I wouldn't say it is the absolute darkest adaptation I've ever been exposed to. Though that being said, this one is plenty DARK. (We may be talking the difference between black-black and navy-blue.)

I found the premise to be excellent. By excellent I mean engaging and thought-provoking. Even if I didn't love, love, love the author's answer to a question, I found the question interesting and engaging. I hope that makes sense!

There is essentially one--possibly two--character(s) explored with great depth and substance: Wendy primarily and perhaps her daughter Jane. The other characters, in my opinion, aren't handled with the same depth and care. It may not bother some readers that Wendy is 1000% developed and the other characters not so much. I would have liked a little more spread around. But that could just be me.

It definitely provides social commentary in terms of women's choices or lack thereof. Her freedom depends on the discretion of her brother who doesn't really know her or care to understand her. Her freedom ultimately depends on her saying yes to marrying a stranger--the son of her brother's business partner. There's a reason why this business partner is so desperate to marry his son off that he'll agree to his marrying a resident of an insane asylum. And again I think social commentary is provided here as well. Neither Ned nor Wendy are free to live life on their own terms--to love the person of their own choosing. So to make it in this world, this society, they have to give in--in some ways--so they can blend and pretend. But that doesn't mean there isn't genuine friendship between the two.

I wish that Michael had entered into the story more. I would have loved to see his character arc shown instead of just told. We know that he survived the war--but it is haunting him and he is in many, many ways broken.

I think one of the themes is THE TRUTH. And how important it is to be able to live your truth, speak your truth, share your truth. But truth--at least in 1931, the present day of the story--comes with risks and consequences. Speaking of Neverland ultimately led to Wendy's being committed. Jane, once she returns, will have to face that same decision.

Darling, darling, darling. She knows the word for fondness, knows Ned means nothing by it, but she can't help loathing it. The word has become a weapon, not in Ned's mouth, not on purpose, but over the years it's been a word to soothe, to dismiss, to hush. Her own name taken from her and turned against her--a gag, a chain.