68. The Dire Days of Willowweep 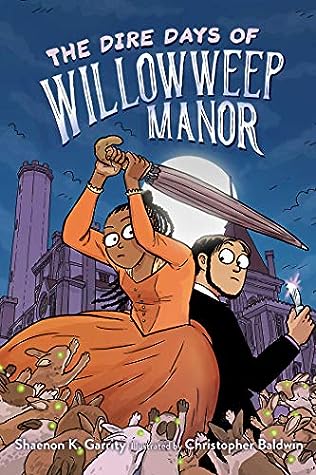 First sentence: A dark and stormy night! Through windswept torrents I come...seeking my inmost heart's desire. My thirst is unslaked by the disconsolate storm; my need burns through the autumnal chill. Pleeeease can you reconsider my grade?

Premise/plot: Haley, our heroine, is more than a little obsessed with gothic novels. Her teacher--for better or worse--has told her enough is enough is enough. No more book reports on gothic novels. On Haley's walk home from school--in the rain--she crosses a bridge and sees a man (a stranger, of course) drowning. Despite his protests that he doesn't need help, she jumps in to save him. She soon finds herself in over her head...no she doesn't almost drown...but she does find herself in another universe.

Taken to Willowweep Manor, she finds herself LIVING in a world strongly/heavily influenced by gothic romances. She's keeping company with three brothers--Laurence, Cuthbert, and Montague. There's a housekeeper and a ghost in residence. She soon learns that she's in a pocket universe (pocket world???) and that there are leaks from other realities--cracks in the multiverse. An evil is invading Willowweep, and she may be called upon to help...

My thoughts: I really LOVED this graphic novel. For the record graphic novels are not in my top three--or even five--genres that I love and adore. I don't read many per year. But this one, this one is special. It was begging to be read. It is both a PARODY of gothic novels (which I have definitely read my fair share of over the years) and a fun venture into science fiction (with alternate universes!).

There's a pamphlet guide to running this universe--not very helpful--that features an illustration vibing Miss Minutes in her cheerfulness and quirkiness.

The dialogue between the characters I found amusing and fun. Very light. Not taking itself too seriously. Not trying to be historical. It almost reminds me of Nathan Hale's touch of humor in his graphic novels.

Haley: I've read about this. You wouldn't be one of those foreboding housekeepers who rules the manor with an iron fist and secretly fondles the mistress's lingerie, would you?
Wilhelmina: The mistress is no longer with us.
Haley: You didn't answer my question.

Montague: What do people in your universe do when reality starts springing leaks?
Haley: I'm not sure. Look at cat pictures until we feel better?

Laurence: We really have a ghost, eh?
Haley: Sort of. What I don't understand is why only I can see her.
Cuthbert: Oh, that's simple! You're a guest at the old manor. They always see ghosts. Especially if they're maidens.

Montague: Are you holding on all right?
Haley: Actually, yeah. This must be one of my maiden powers. I'm not sure what else I can do. Pine? Get the vapors? Tutor unsettling children?
Montague: I'm a choleric antihero, my chief power is having bad ideas.

I enjoyed reading this one. Read it cover to cover in one sitting. When it was over, I was tempted to reread it--or at least parts of it.