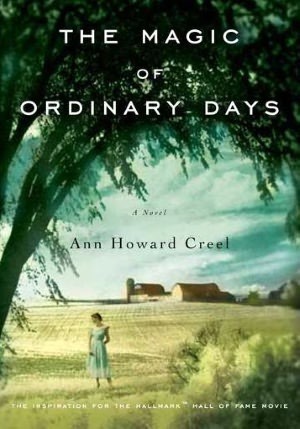 First sentence: I don't often think back to that year, the last year of the war--its days, its decisions--not unless I'm out walking the dawn of a quiet winter morning, when new snowfall has stunned into silence the lands around me, when even ice crystals in the air hold still. On those mornings of frozen perfection, when most living creatures keep to a warm bed or a deep ground hole, I pull on my heaviest old boots and set out to make first tracks through the topcrust and let the early dawn know I'm still alive and appreciating every last minute of her fine lavender light. Then I remember.

Premise/plot: Olivia (Livvy) Dunne finds herself married to a stranger, Ray Singleton--a farmer--after she finds herself in an unfortunate situation: she's pregnant. Her father arranges with another minister to marry off 'poor' Livvy to a good, stable man. The two meet on their wedding day. She asks him WHY he's willing to marry a stranger and IF he'll be able to love the baby. His answer surprises her, he feels it's God's will to bring them together, and, of course, he'll love her baby. It is the raising of a child that makes a father.

The novel chronicles their lives together that first year as she adjusts to an isolated country lifestyle, as she tries to find ways to occupy her time and grasp the fringes of her true dreams. She loves history and archaeology. She loves finding and discovering old things. She loves finding out about the past, imagining herself in that past. Ray is only a little helpful, it is Ray's sister, Martha, who is able to help her the most. For Martha has stories about their parents, grandparents, etc. It is Martha who is able to tell her about the settling of the place, the original structures built, how their family lived and worked and struggled to create a legacy for the family. And Livvy does see how very much Ray loves the farm, the land, the strong connection he feels to the past and present.

Livvy is lonely still, however. She becomes friendly with two Japanese women living at a nearby Japanese internment camp. She actually meets them in her own fields--for they have been hired to help with the harvest. It seems they are an answer to her prayers; they are so nice and friendly and pleasant to talk with. They even volunteer their tailoring services--providing her with a maternity dress and suit. But is the friendship genuine? I think it's as genuine as it can be since Livvy doesn't like being vulnerable and the two sisters almost by necessity don't feel comfortable telling all their secrets either. I'm not even sure Livvy realizes this until the end when she sees that by protecting herself, protecting her heart, always keeping things inside, she's keeping love out too.

Livvy's perspective provides insights to readers about what it was like to live during this time. Livvy tries to keep up with the war through newspapers--though she has to content herself with news that is a day or two old since the delivery is so slow. The travel restrictions also keep Livvy at home with Ray instead of allowing her to visit her family at Christmas and New Years--like she originally planned. ("I'll Be Home for Christmas" would have still been a 'new' Christmas song, having been done in 1943. "Have Yourself a Merry Little Christmas" would have been another 'new' holiday song first introduced in the 1944 musical, Meet Me in St. Louis. "The Christmas Song" was written in 1944, but not recorded until 1946.)

I really enjoyed this novel. I loved Ray and Livvy. I loved Martha and her daughter too.


My thoughts: I've read the book twice now. But I've watched the movie probably twice that. I love, love, love the movie. I do. I enjoy the book as well. Both are wonderful. I do think the book explores things with a little more depth. But the romance perhaps plays better on the screen.

I am going to look for this movie!

Thanks for sharing this review with the Historical Fiction Reading Challenge