Honestly, I didn't know quite what to expect from The Boy With Two Belly Buttons. It's obviously a silly book with a cutesy message of self-acceptance...but somewhere between the covers of this one...I was charmed and pleasantly amused. It begins off simply, "Solomon never thought it was strange that he had two belly buttons until he got a baby sister. Anya had only one." At first he was concerned, his sister was missing a belly button. Then the devastating

news hits him: one was the right number of belly buttons a person should have. He was the odd one, the different one, the freak. The next pages has Solomon seeking out the bellies of young and old...trying to find some answers. His quest even takes him to a professor of buttonology. But it isn't until he meets a famous movie director that our young hero learns that being special, one-of-a-kind, unique is the best thing he could be. While I suppose some might find it silly or over-the-top, I find it charming and enjoyable. I haven't tried it out with kids, I don't have easy access, but I would imagine that it would inspire a few giggles along the way.

I think what makes this story a success, besides the text of course, is the artwork by Christoph Niemann. See what I mean... 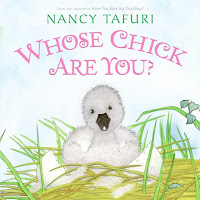 While it doesn't really get better than P.D. Eastman's Are You My Mother?, Nancy Tafuri's newest picture book of a newly hatched bird is a cute addition to the field. What do I love about this book? I love the illustrations; they're beautiful. Really outstanding. The colors are subdued and soothing. (Nothing bright and cartoony going on here. This book is all about nature.) The text is simple and straightforward. There are only a few words per page, and the font is large. (I can't speak for everyone, but there is something so inviting about a picture book that is not afraid of being labeled 'too simple.') The book opens with the rising of the sun, the various birds in the area are waking up and exploring...and they each discover--on their own--a nest with an egg on the verge of hatching. Instead of a new baby bird seeking its mother, these are just curious birds anxious to find the right mama for this soon-to-be born chick. But the mother hasn't abandoned her nest, she is nearby and waiting to claim her young one. As I mentioned, the text is simple, and the message is a reassuring one about families, love, and belonging. Overall, a cute story. 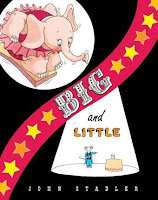 Big and Little by John Stadler is a picture book that has thoroughly charmed me this past week. It is about a mouse and an elephant. Hence the title big and little. You might think you know where this is going, but you may just be surprised. Ellie, the elephant, is going to climb a tall ladder and dive into a small glass of water. The mouse is the ringmaster of the show. Read along as this incredible act unfolds...

Prepare to be amazed and astounded by how BIG on suspense, such a little book can be! You will gasp! You will laugh! You will not believe your eyes!

Be the first in your neighborhood to see for yourself how the magic unfolds!
Hurry! Hurry! Read it today!

(No one will be admitted to or allowed to leave the book during the last six pages so as not to ruin the ending for others.) 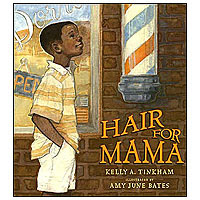 October is usually family picture time for the Carters, but this year is different. Mama has cancer and all of her beautiful hair is gone because of her chemotherapy treatments. She doesn't want to be in the photo. Eight-year-old Marcus knows that the photo won't be right without Mama, but what can he do?

The book was inspired by a conversation Kelly Tinkham had with her five-year-old son when she told him she had cancer and would be losing her hair. Hair for Mama is a loving, sweet story about a family facing the uncertainty of the future. Although many things are different know that the mother is sick, one thing remains constant: love. This family loves and cares for one another deeply. Marcus's determination to save the day and give his mother hope is a wonderful thing to see depicted in a picture book. While I'm sure it's not the only picture book out there depicting serious illnesses affecting a family, it is one of few. This is a topic that is just not addressed as frequently as it should be. The text and illustrations are just right. 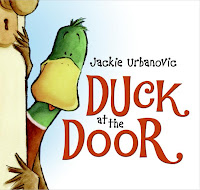 Knock. Knock. Knock! Someone's outside the door. . . But who? Meet Max--a duck for all seasons.

A duck shivering in the wintry cold. A duck making his way to the front porch of a cozy-looking house. Luckily for Max, this house is the home to LOTS of animals. And they just happen to be the ones to hear his arrival first.

All twelve animals--birds, dogs, cats--fly, run, leap as quick as can be to their owner--the boss of the place--Irene. Why? She always knows just what to do to make everything right around the house. She opens the door to find a snow-covered, miserably cold duck. He's brought inside and his story is told. Max stayed behind when his flock left because he thought winter would be fun. Irene and the gang welcome him with open arms--at least at first. But day after day, week after week, Max soon begins to take charge.

In January he learned to use the remote control. (He enjoyed Wild Kingdom and World Wide Wrestling.)
In February he discovered he had a flair for cooking.
By March he had made himself right at home.
but by April it was clear that Max had learned too much.

Duck at the Door is a fun book about finding your home, finding friends, finding your place in all seasons, all kinds of weather. I loved, loved, loved this book. And I loved the illustrations the best of all. Max is my kind of duck.
Posted by Becky at 12:56 PM