The True Meaning of Smek Day

I'll admit that I didn't get off on the right foot with Smekday. In fact, there was a time, a brief time, when I really didn't see the point to this one. A time when I thought it was just plain silly and a waste of time. Then I realized that I was in a terrible, terrible mood. I decided to give us some time apart. A week apart. And then I'd try again. Begin again. So yesterday I picked it up again. I started right back at the very beginning. Pretended it was the first time we'd ever met.
You know what...it worked. I won't say I loved, loved, loved it. I won't say I LOVED it. But I genuinely enjoyed it. It was a pleasure to read.

Gratuity Tucci (Her friends call her "Tip") along with her classmates is given an assignment: they must write an essay--at least five pages long--describing the true meaning of smekday. Smekday? What is Smekday? Smekday, the holiday formerly known as Christmas, was the day when the aliens--the Boov--invaded Earth. Earth became Smekland. Christmas became Smekday. And humans, well, they became the "Noble Savages." The point of the essay--besides the fact that it is being graded for a school assignment--is that the winning selection will become part of a time capsule that will be opened in a hundred years.

The novel, The True Meaning of Smekday, is Gratuity's assignment. It is divided into three parts. The first part is her original assignment. The teacher gave her a C. The teacher also gave her the opportunity to redo the assignment as extra credit. Another chance to win the contest. This 'winning entry' is the second part. (Did you have any doubt that Gratuity would win???) The third part is what happens next. What happens after the 'official' ending to her assignment.

The novel is set about five years in the future. A brief portion happens in 2011, but most of the action occurs in 2013. It follows the story of Gratuity during the alien invasion--from the Christmas when they sucked up her mother with their ship--to Moving Day--where all all Americans were forced to relocate to the state of Florida--to Excellence Day--the day where...well, I'll save that one. You don't want to know too much!!!

The main characters are Gratuity and J.Lo. J.Lo is an alien--a Boov--who becomes surprisingly enough best best buddies with our heroine. J.Lo is a he--a boy--though you should know there are seven genders among the Boov. Like most Boov, his understanding and use of English is awful--annoyingly awful. But if you can forgive the never-ending talking of this alien in horrible, horrible, horrible English. Then you might find yourself charmed by this book, charmed by this relationship. The book is quite funny. I didn't love every joke, every sarcastic, every "witty" attempt...but for the most part, I thought it worked well enough. I am reading an ARC of the novel. I don't have the finished product in front of me. But from the drawings that were included, I think they make the novel what it is. It makes it that much more entertaining, interesting, whatever you want to call it. 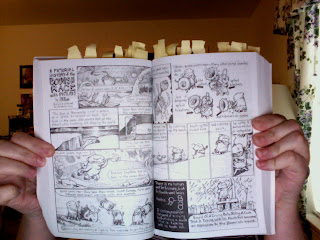 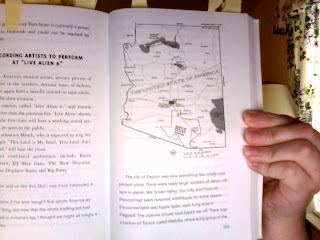 Here are a few of my favorite bits:

Sedona--America's musical artists, seventy percent of whom live in the northern Arizona town of Sedona, will once again hold a benefit concert to raise awareness of the alien invasion.
The concert, called "Live Alien 6," will feature more artists than the previous five "Live Alien" shows, and for the first time will have a working sound system and be open to the public.
Pop sensation Mandi, who is expected to sing her new single, "This Land is My Land, This Land Ain't Smekland," will host the event.
Other confirmed performers include Bruce Springsteen, DJ Max Dare, The New Draculas, Madonna, Displacer Beast, and Big Furry. (322)

Here are a few things our hero learns after the invasion and relocation:

Most folks will steal if they can get away with it.
Most people want to break other people's things and roll cars over, but won't unless their planets are invaded by aliens, or their basketball team wins the finals.
About one in a hundred people resent having to wear clothes all the time.
Alien invasions make people stick flags on everything. Not just American flags, either. The Jolly Roger made a real comeback around this time. (325)

And this little gem is from the Boovish history we receive in comic form: