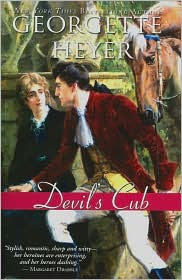 There was only one occupant of the coach, a gentleman who sprawled very much at his ease, with his legs stretched out before him, and his hands dug deep in the capacious pockets of his greatcoat.

Every Heyer book is packed with potential--with promise. Will it be the one to become my new favorite and best? Can it top the previous Heyer novels I've read? Because just when I think I've found the perfect Heyer, the one that just has to be the best one ever, I find myself falling for another hero, charmed by another great couple, or hooked by another adventure or drama.

Devil's Cub is a sequel to These Old Shades. That giddy-making couple of Justin and Leonie have an all-too-grown-up son, Dominic (aka Vidal). And boy does he have a way of getting into trouble. (Some might say he takes after his dear old dad--back before his marriage calmed him down. Though Leonie fears he takes after her--after her side of the family.) After his latest scandal, his father decides it would be best for him to leave England, to spend some time in Europe. His mother would like to see him settled down, married to a girl who can calm him down and keep him safe and happy. (If he's happily married then surely he won't be getting into so many duels. After all, he's mostly fighting men over women.)

But Vidal doesn't head to France (to Paris) alone. He plans on taking Sophia Challoner along with him. To set her up as his mistress. (Tis done there, he assures her.) He sends a letter, a note, telling her where and when to meet him. She doesn't get the note. It's intercepted by her older sister, Mary. (In poor Mary's defense, it is addressed to "Miss Challoner.) How can one sister save the other? Well, for better or worse, Mary decides to go disguised in her place. Granted, she doesn't know the destination (Paris). She thinks she'll be able (easily) to return home after her true identity is discovered. But what she doesn't know about Vidal could fill a book.

How will he react to this trick? Can Mary hold her own?

I love, love, loved this book. Granted, I didn't love everything about this one. There is one scene in particular that I didn't care for at all. (One scene that made me very uncomfortable--SPOILER--a scene where Vidal wants to show his strength to Mary--pointing out how easy it would be for him to do her harm.) But for the most part, I really enjoyed this one. It wasn't so much Mary-and-Dominic that I loved so much as the whole package. All the characters (about half of these were carried over from These Old Shades) that make this one work really well. I loved how everything came together at the end. It was oh-so-satisfying.

I mentioned that These Old Shades is my mom's favorite book. Well, I think Devil's Cub might end up being mine. At least for now.

I didn't realise that this was a sequel to These Old Shades. I just read that one recently, so will have to pick this one up now.

It's not precisely a sequel to These Old Shades, but we revisit the main characters from that book. This is my very favorite Georgette Heyer Regency romance. I own them all and have read them all multiple times.

This is my favourite Heyer novel. Dominic is so BAD! :)