The Lonely Hearts Club (YA) 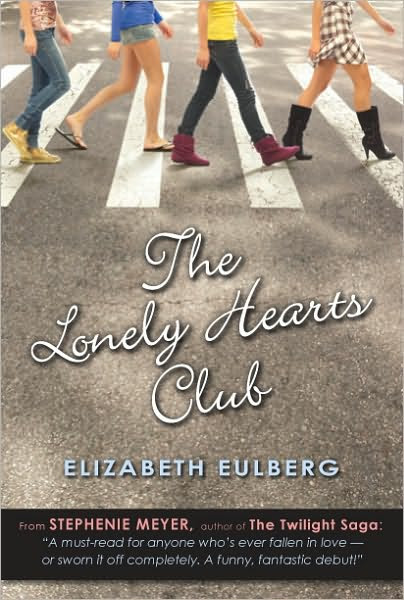 When I was five years old, I walked down the aisle with the man of my dreams.
Okay, make that boy. He was five, too.

This one had me at hello. Even before that great first line. The title and cover show from the start how it's inspired by the fab four--aka The Beatles. (Not that you have to love John, Paul, George and Ringo to appreciate this new, fun YA romance. You don't. I promise.) The Lonely Hearts Club stars Penny Lane Bloom, one of three daughters named for a Beatles' tune. (Her older sisters are Lucy and Rita, in case you're curious.) Penny, we learn, is sick and tired of boys. After having her heart crushed one too many times, she decides to swear off dating. Not forever ever, just through high school. With a little help from her friends--some new, some old--she may just discover a few things about herself, about life, about love.

There were so many things I loved about this one. Penny herself being one of them. Penny's friends being another. It was nice (and refreshing) to see a YA book deal so well with friendships between girls. In a romance--as in real life at times as this book illustrates--friendships can often take a backseat when love enters the picture. The second a guy enters the picture, a girl can lose herself, become so wrapped up in being a girlfriend, that she completely ignores her friends, begins treating them horribly. The Lonely Hearts Club is about a group of girls who decide that they don't want to lose themselves to boys. Don't want to get so distracted by guys, by boyfriends, that they lose who they are, that don't want to be defined by having (or not having) a boyfriend.

How was the romance in this one? I liked it! There are several guys in The Lonely Hearts Club. The heart-stomper, Nate Taylor, the obnoxious-flirt with a big-mouth, Todd Chesney, and the so-easy-to-talk-to Ryan Bauer. (Who happens to be the ex of one of her new-old friends, Diane Monroe.) Ryan especially won me over.

Is this one perfect? No. I wouldn't go that far. But it was fun; it was satisfying. I cared about the characters. I definitely enjoyed every minute I spent reading this one. So I would definitely recommend it to anyone who loves YA romance.

Great review! I was curious about this one, but now I really want to read it. At least January is not such a long wait!

Cool review I just might put this on on my list! Do you read any of Nicholas Sparks books? Check out my blog(: