The Way We Live Now

Let the reader be introduced to Lady Carbury, upon whose character and doings much will depend of whatever interest these pages may have, as she sits at her writing-table in her own room in her own house in Welbeck Street.

I'd like you to meet a good friend of mine: Anthony Trollope's The Way We Live Now. This wonderfully thick novel was a little treat I picked up last year around this time for my birthday. It had high priority this past month because I volunteered to read it for Amy's little project. Her, "Newsweek, You're On! The Fifty Books for Our Times Reading Project." You can see a list of all fifty books here. Topping the list is my choice, The Way We Live Now.

This dramatic novel is all about men and women living beyond their means. Taking risks here and there trying to outrun the bill collectors. Wanting so much to live the good life, the high life, that they lose all sense of being realistic and practical. If they want it, they want it then and there. They feel like they deserve to have the best of everything. Sir Felix Carbury, for example, wants everything now, now, now. He thinks nothing of asking his mother (Lady Carbury) for her very last coin just so he can go out to his club and gamble and drink all night. He thinks nothing of asking his good old sister (Henrietta) to sacrifice so that he can have a new coat or hat. He's heartless and selfish among other things. 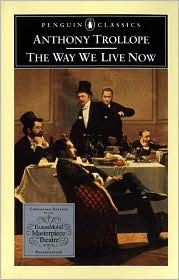 Is this Felix's story? Not really! He's just one of a dozen or so characters. Most of these characters revolve around the oh-so-wealthy Augustus Melmotte. Who is Melmotte? Where did he come from? Is he as wealthy as he claims? What about his wife and daughter? Is it true that she's to bring a fortune when she marries?

Some dislike him socially but don't mind doing business with such a man. He's affluent. He's powerful. He knows how to carry himself. But is he honest? Is he trustworthy? Does that even matter so long as he's on the rise? So long as his schemes are always successful?

The Way We Live Now has a little bit of everything for readers: business, politics, love and romance, humor, and social commentary.

This book had me almost from hello. It begins off by introducing Lady Carbury. Of showing readers three different letters she'd written to newspapermen that day. She's hoping that her new book, her first book I believe, will be favorably reviewed. As she is asking these three men to go above and beyond--in a way--I found myself smiling with the inappropriateness of it all. This character gave Trollope a great way to talk about writing, publishing, and reviewing. 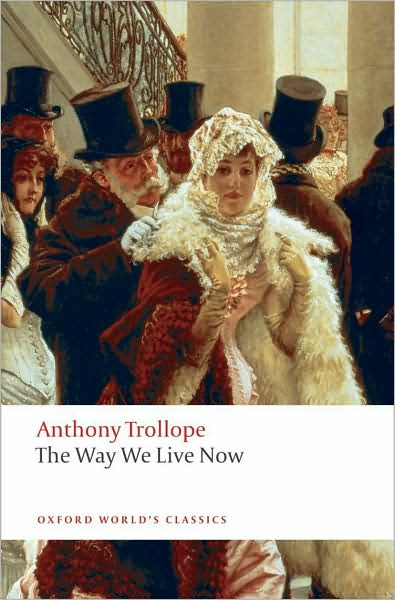 Soon I found myself caring about all the characters, and all the stories. Paul Montague's confused love life--torn between the woman he really loves and respects and the American woman (supposedly divorced) whom he hastily agreed to marry in his travels. Maria Melmotte's dysfunctional home life. Her wanting so badly to be loved for herself, to matter to somebody. Poor Maria throwing away her affections on that jerk Sir Felix! Roger Carbury hopelessly doomed affair. One of the only men with common sense in the whole book. His big heart that wants only the best for Miss Henrietta. How he loves her! Even knowing that love will never be returned! Mr. Broune who despite it all finds a way to love and appreciate the crazy Lady Carbury! There was just so much to love and appreciate in this one!

Why do I love Anthony Trollope? He's a great writer. He tells a great story. He really captures so many different aspects of being human. His characters are always well-developed and above all else interesting or fascinating. They may not all be likable, or all be good. And all the better if they're not. (A world full of Roger Carbury's might be a bit boring or safe.) He creates multi-dimensional characters that become part of you. He creates unforgettable characters that stick with you. I also really love his narrative style.

Becky--I'm so glad to know someone else loves Trollope! I loved this book--and there's a BBC miniseries of it that is a pretty good adaptation.

This one wasn't from today! I had it scheduled to post today before I signed up for the Readathon. :) But yes, I'm keeping myself busy reading!

Okay, seriously, 700 pages?? Oh maybe this is why I haven't read Trollope.

I've never heard of this, but it certainly sounds interesting!

I've never heard of it before either but it definitely sounds really interesting. I, too, love how you showed off various book covers.

This one sounds like a winner and I'm so glad you linked it up so that I could learn more about it!

Jennifer, Trollope does write shorter novels as well. The Warden, for example, might be a good place to start.

The thing is even at 700 pages, I didn't want it to end. I so seriously loved the characters, and the writing, that I could have kept reading it forever and been happy.