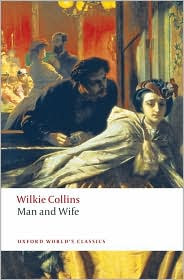 On a summer's morning, between thirty and forty years ago, two girls were crying bitterly in the cabin of an East Indian passenger ship, bound outward, from Gravesend to Bombay.

No matter how you look at it, Man and Wife is a strange and often uneven novel. Definitely melodramatic. As complicated as any modern soap opera.

Anne and Blanche are best friends. Their mothers--also named Anne and Blanche--were also best friends. (Though both mothers are dead by the time this story really gets started. Perhaps that is why these two--now of marriageable age--cling to one another so fiercely.) But this friendship is about to be tested. And not just a little bit. Anne, out of necessity or "duty" is about to separate herself (perhaps forever) from her closest friend. Foolishly, Anne gave into temptation with Geoffrey Delamayn, and is now reaping the consequences. She's pregnant. And she's trying to push her lover into marriage. Reminding him of all that he's said and done. How he owes her and his unborn child. The two arrange to meet at an inn and pose as man and wife. She wants--of course--for the marriage to take place soon after. But before Geoffrey can arrive (but after Anne's already run away), he receives notice that his father is ill--perhaps dying. He's needed at home. In London, I believe. So he convinces his friend, Arnold Brinkworth, to go in his place. To deliver a note to Anne. But to do this, he has to tell a few white lies to the landlady. To say he is the young lady's husband. (Arnold, for the record, is newly engaged. He's in love with Blanche.) This makes both uncomfortable. Neither likes the deceit. And both would undo this day if they could. But what's done is done, right?

This book is set in Scotland and England. And it concerns the Scottish marriage laws of the time. (Irregular little marriages including marriage by declaration and marriage by correspondence.) It's an integral part of the plot and much too complex to try to explain here. But these vacationing characters get into quite a mess by the end of it!

I mentioned that the book was strange. Perhaps that's not quite the word for it. The book tackles so many different topics. Scottish marriage laws. Marriage in general. The lack of women's rights. (How if a woman is a wife then she is the property of her husband. It doesn't matter how evil and cruel and drunk and abusive he is. She is his for life to do with as he pleases.) Society itself. The 'dangers' of sports and athleticism. Perhaps it is the attack on sports--the correlation Collins makes between moral depravity and physical fitness--that stands out as most strange. Geoffrey Delamayn is quite an athlete, a sportsman, he prides himself on his physique. He exercises and trains. He does various sports--including running. And Collins argues that all the energy Delamayn is putting into sports is ruining him mind, body, and soul.

The book is definitely didactic in places. And not just about sports. The other causes taken up within the book--particularly marriage and how women should have rights even if they are married--are a bit more welcome to readers though. But before you champion Collins as being completely enlightened and wonderful, you have to wrestle with passages like these:

However persistently the epicene theorists of modern times may deny it, it is nevertheless a truth plainly visible in the whole past history of the sexes that the natural condition of a woman is to find her master in a man. Look in the face of any woman who is in no direct way dependent on a man: and, as certainly as you see the sun in a cloudless sky, you see a woman is not happy. The want of a master is their great unknown want; the possession of a master is--unconsciously to themselves--the only possible completion of their lives. (chapter 31)

Here is a little love scene between Arnold and Blanche:

[Blanche] could have boxed Arnold on both ears for being so unreasonably afraid of her.
"Well," she said impatiently, "if I did look in your face, what should I see?"
Arnold made another plunge. He answered: "You would see that I want a little encouragement."
"From me?"
"Yes--if you please."

Blanche looked back over her shoulder. The summer-house stood on an eminence, approached by steps. The players on the lawn beneath were audible, but not visible. Any one of them might appear, unexpectedly, at a moment's notice. Blanche listened. There was no sound of approaching footsteps--there was a general hush, and then another bang of the mallet on the ball and then a clapping of hands. Sir Patrick was a privileged person. He had been allowed, in all probability to try again; and he was succeeding at the second effort. This implied a reprieve of some seconds. Blanche looked back again at Arnold.

"Consider yourself encouraged," she whispered and instantly added, with the ineradicable female instinct of self-defense, "within limits!"

Arnold made a last plunge--straight to the bottom, this time.

"Consider yourself loved," he burst out, "without any limits at all."

So the book has its strengths and weaknesses. I mentioned some of the weaknesses already, but I'd like to focus on one of the strengths now. Sir Patrick Lundie. Wow. I loved Sir Patrick. I really did. He is the uncle to Blanche, a lawyer, an older man who has a big heart. He was such a stand-out character. He was so kind, so wise, so witty, so funny, so intelligent. He was a good man. The complete opposite of our villain, Geoffrey Delamayn. (Geoffrey made Heathcliff look like good boyfriend material.) I found myself smiling every time Sir Patrick collided (in dialogue) with Lady Lundie, his sister-in-law.

This was my first introduction to Wilkie Collins, and I found this one to be interesting. True, it has flaws. It's a bit long, and it's prone to rambling at times. It's definitely didactic in nature. But at the same time it's complex in a good way. We meet a lot of interesting characters--good and bad--that are well-developed. (We may not love all of the characters. We may want to yell at some and slap a few others.) But the suspenseful pace of the last two hundred pages or so of the novel help to make up for some of the heaviness of the earlier sections. Is it for everyone? Probably not. But I'm very glad I read it.

© Becky Laney of Becky's Book Reviews
Posted by Becky at 8:01 AM

I will definitely have to read this! It sounds fascinating even with its flaws.

I love Wilkie Collins. I thought I'd read all of his books, but apparently not! I'll have to add this to my list. Thanks, Becky!

It does sound like this is uneven, but interesting that the thing that stood out to you was the characters. Collins is so good at creating a good character.

Despite Collins' appearance as a progressive in terms of woman's rights, I'm rather convinced he is not. That quote you gave supports that! Collins lived with two women at the same time and never married. I think this book was kind of a response to his own situation.

Having just read your review of The Moonstone I noticed you'd reviewed what is to date my favourite Collins novel. Like you, I loved Sir Patrick. Every use of him within the plot was an act of genius (and the ending had me grinning like a madwoman I have to admit).

It's not an easy book. The passages about the intricacies of running required a little persevering to get through but it's an enjoyable read. I think that's the main thing with a Wilkie Collins novel - I haven't yet found one which isn't entertaining.

I am now reading my 4th Wilkie Collins book in a row. I can't seem to stop. I've not read Man & Wife but am currently reading Armadale. I've also read The Woman in White, Moonstone & No Name. The Woamn In White & Moonstone are my favorites. But all are so well written with the patented Collins plot twists. I love this writer & hope others will discover his work. He was a friend & comtemporary of Dickens and has been somewhat lost in his shadow. But in their day, he often matched Dickens in book sales.

Hey sounds awesome will have to read soon.