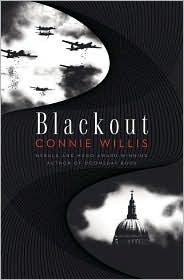 Oxford--April 2060
Colin tried the door, but it was locked.

How does Blackout compare to Doomsday Book and To Say Nothing of the Dog? Well. I'm not sure they can. While both books are about time traveling historians, there's an intensity to this one that can't quite be put into words. Not in a way that would do it justice.

In, Doomsday Book, it gets intense. Bad things are happening. And there's a mystery to be solved. There are unknowns, yes, but you see people hard at work solving the problem. Trying to at least. There's this urgency. Dunworthy is ever-anxious to save Kivrin--with a little help from Colin, of course.

Blackout is more of a mystery. The silence of those stories that are not being told weighs on the reader. At least this reader.

Let's start with what we do know. Blackout tells the story of three historians working on World War II. There's Merope Ward who is "Eileen" on this assignment. She's observing children evacuees. There's Polly Churchhill who is "Polly Sebastian" on this assignment. She's covering the first weeks of the London blitz, working as a shop girl on Oxford Street by day. There's Michael Davies (Mike) who is covering Dover, he's posing as an American reporter covering the Dunkirk evacuation. These three historians--working undercover, of course--are not supposed to have met. For their assignments were not supposed to overlap.

But. One after another these historians learn that their drops are not working. Each expecting a retrieval team at any moment to "rescue" them, to send them home back to where they belong. But no retrieval teams arrive. And each becomes increasingly alarmed. Why aren't the drops working? Is the Net down? But even if the Net was down, this is time travel, it wouldn't effect when they were rescued, right? Is the Net not working because they've changed history? That's supposed to be impossible. Historians (time-travelers) cannot change history. But what if it is possible? What if they have changed history? Why isn't Mr. Dunworthy sending anyone to help them? Where is Colin in all this? Do they even know that these historians are trapped?

Blackout captures the uncertainty, the anxiety, the frustrations of a war-time England. It's compelling, impossible to put down. But. it isn't quite as satisfying as Doomsday Book and To Say Nothing of the Dog because it's incomplete. This is only half the story. All Clear--published this October--completes the story.

Thanks for the information, Becky. I loved Doomsday Book and To Say Nothing of the Dog. I'll wait until I can get both parts of the book, and I'm sure I'll enjoy Ms. Willis's latest.

Hey Becky,
I also love books and especially romance!
AAAH!!
Can't live without it!
Hope we can exchange the names of good books and become friends.

I'll have to read these back to back. I've already added them to my list! I'll get this linked on War Through the Generations soon.