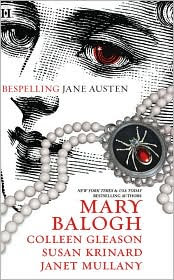 From Almost Persuaded by Mary Balogh: Miss Jane Everett, middle daughter of Sir Horace Everett of Goodrich Hall in Hampshire, did not call as often as she ought at the vicarage in the village nearby. She called everywhere else--on tenants and laborers and others, on those who sick or elderly or in need of any sort. She took her duties very seriously.

From Northanger Castle by Colleen Gleason: Miss Caroline Merrill smoothed her ruffled-hem skirt as she settled into the chair against the wall. She quickly tucked her feet under the seat to keep them from being stepped upon or tripped over, and confirmed that the heavy, bulky reticule still dangled from her wrist. One never knew when one might need one of the accoutrements from within.

From Blood and Prejudice by Susan Krinard: It is a truth universally acknowledged that every decent straight guy who isn't dead broke, is in want of a good woman. As my dear Grandpa Bennet used to say...Bull.

From Little To Hex Her by Janet Mullany: "She turned me into a frog." I bit back the comment that he seemed to have recovered. "I can't tell you how sorry I am, Elton. I know it's no excuse, but it is almost full moon, and Harriet tends to be..." I paused and added a description of my assistant that seemed lame as soon as it was out of my mouth. "Difficult."

Bespelled By Austen is a collection of paranormal novellas "inspired by" four Jane Austen novels. Northanger Castle and Almost Persuaded are historical retellings of Persuasion and Northanger Abbey. (Names and situations have been altered.) Blood and Prejudice and Little To Hex her are modern day adaptations of Pride and Prejudice and Emma. Names have not changed though many aspects of the novel have been updated to reflect a contemporary setting. Each novella is by a different romance novelist. As you can imagine with reading any collection of novellas I have favorites and not so favorites. (My favorites may not be your favorites.)

My thoughts on "Almost Persuaded": I was not almost persuaded to believe in reincarnation. Unfortunately, that seemed to take precedence over the romantic aspects of this retelling of Persuasion. Much of the dialogue between our hero, Captain Mitford, and heroine, Jane Everett, seeming to be about past lives, soul mates, and such. You might not think it would be so intrusive to the text, but I found it to be so. When they weren't talking about the many times they got their love wrong in their past lives, they were doing things that seemed out of place with the historical time period. (Like shedding some clothes to go swimming together, and then getting intimate.) I did NOT like this one at all. Persuasion is my favorite Austen, and to see it "adapted" in this way irritated me.

My thoughts on "Northanger Castle": To be honest, I don't have many thoughts on this one. Unfortunately, I had a headache while reading this one, and I didn't feel a connection with this one. But. I think it was probably my fault. I think I would have been struggling to "enjoy" whatever I was reading at that time.

My thoughts on "Blood and Prejudice": This one was interesting. I thought I wouldn't like the modern-day adaptations. But I found both Blood and Prejudice and Little To Hex Her the best in the collection. Elizabeth, our heroine, finds out a secret about Mr. Darcy--and Mr. Wickham--they're vampires! But she's still doesn't have all her facts straight. Can Elizabeth discover the truth in time to find love for herself and her older sister, Jane? I liked this one.

My thoughts on "Little to Hex Her": This one was my favorite! Dare I say it? This one rivals Clueless for me on my favorite telling of Emma. (Emma is NOT my favorite Austen. I struggled through that one.) Emma, our heroine, is a matchmaker. That's her job. She runs a PARANORMAL dating service. Elton? Well, he's an Elf. Harriet? She's a werewolf. Frank Churchill? A vampire. Jane Fairfax? Well, she's a moody witch. Knightley? Well, he's a wizard. And her ex-boyfriend.  This adaptation was playful and flirty and fun. It worked really well--from the smallest details--"Missy" who can't stop talking about the emails she receives from Jane Fairfax--to the big declaration of love. I just loved this one. It would make a great movie!


© Becky Laney of Becky's Book Reviews
Posted by Becky at 9:24 AM

Hi Becky, I recently read this one too. I had mixed feelings. I liked 2 (Northanger Castle & Little to Hex Her)and not so much the other 2 (Almost Persuaded & Blood and Prejudice). So there you go. I think you should give Northanger Castle another try without a headache. I thought it quite clever, but I do like the high comedy of Austen's Northanger Abbey.

I wasn't a fan of the reincarnation one either. Although I liked the remaining three, my favorite were the middle two. Darcy as a vampire was fun!