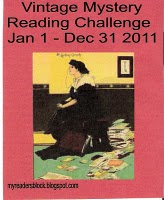 I am joining My Reader's Block's 2011 Vintage Mystery Reading Challenge. When I saw that six of my twenty-four titles for the TBR 2011 challenge fit into this one--it was an easy decision to make! I'll be joining at the GOLDEN AGE GIRLS level. Reading five to seven books from female authors from the vintage years. POST LINKS TO REVIEWS AT HER SITE.

All books must have been written before 1960 and be from the mystery category.


I'll be reading some Josephine Tey, Dorothy L. Sayers, and perhaps some Agatha Christie. Is there a particular author you'd recommend for me?! I'm open for suggestions! 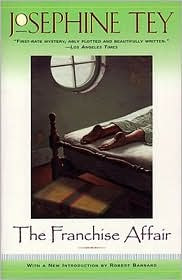 First sentence: It was four o'clock of a spring evening; and Robert Blair was thinking of going home. The office would not shut until five, of course. But when you are the only Blair, of Blair, Hayward, and Bennet, you go home when you think you will. And when your business is mostly wills, conveyancing, and investments your services are in small demand in the late afternoon. And when you live in Milford, where the last post goes out at 3:45, the day loses whatever momentum it ever had long before four o'clock. 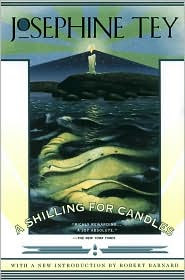 First sentence: It was a little after seven on a summer morning, and William Potticary was taking his accustomed way over the short down grass of the cliff-top. Beyond his elbow, two hundred feet below, lay the Channel, very still and shining, like a milky opal. 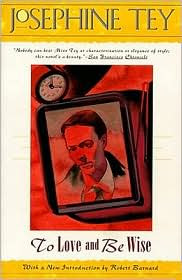 First sentence: "Grant paused with his foot on the lowest step, and listened to the shrieking from the floor above. As well as the shrieks there was a dull continuous roar; an elemental sound, like a forest fire or a river in spate. As his reluctant legs bore him upwards he arrived at the inevitable deduction: the party was being a success." 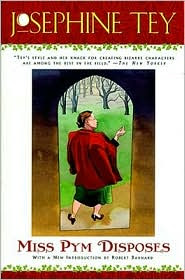 First sentence: A bell clanged. Brazen, insistent, maddening. Through the quiet corridors came the din of it, making hideous the peace of the morning. 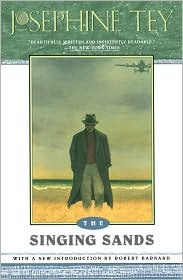 First sentence: It was six o'clock of a March morning, and still dark. The long train came sidling through the scattered lights of the yard, clicking gently over the points.

My library lists many Agatha Christie titles--too many to list. Is there one you'd recommend to a newbie?

You might enjoy the mysteries of Ngaio Marsh, A New Zealand writer. My son and I read several many years ago. Artists in Crime is the only one I specifically remember at the moment but I liked every one I read. More than half of hers written published before 1960. Here's a list of her books and publishing dates:

I've read all of Christie's books. The Murder of Roger Ackroyd and Witness for the Prosecution are favourites. Death on the Nile, Death on the Orient Express, and And Then There Were None are very good too-if you haven't seen the filmed versions already. Death in Mesopotamia was the first one I read so I'm especially fond of that one. You can't go wrong really, she was always an entertaining read.

Have fun with the challenge.

Sandra, thank you!!! I appreciate the suggestions! I've added the Ngaio Marsh (the ones my library has) to my list of potential reads.

You know, "The Old Man in the Corner" by Baroness Orczy would qualify for this as well - she wrote some other mysteries, but this is the only one I've read.L.

Welcome Becky! Hope you have fun with these. You've got some great titles on your list. I love Josephine Tey! And Ngaio Marsh is definitely a good suggestion. Artists in Crime is a good one (not sure of the date). But Enter a Murderer is one of her earilier ones and it is very good.