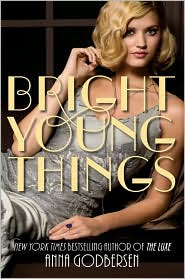 It is easy to forget now, how effervescent and free we all felt that summer. Everything fades: the shimmer of gold over White Cove; the laughter in the night air; the lavender early morning light on the faces of skyscrapers, which had suddenly become so heroically tall. Every dawn seemed to promise fresh miracles, among other joys that are in short supply these days. And so I will tell you, while I still remember, how it was then, before everything changed--that final season of an era that roared.

Letty Larkspur dreams of fame. She can sing. She can dance. She wants to be a star. She has come to New York City with her very best friend, Cordelia, but one little argument separates these two friends. Now, on her own in a strange city, Letty is finding life challenging--but in a good way, mostly. Can she make it on her own? Can she charm her way into the good life?

Cordelia Grey is running away from home. It's a good thing her best friend, Letty, has always wanted to 'escape' to New York, has always dreamed of being a star. But, to tell the truth, she isn't going to New York to support her best friend in her pursuit of stardom. No, Cordelia has dreams of her own. She wants to find her father. She thinks her father is Darius Grey. An infamous character if ever there was one. (He's in the "import" business. He's taking full advantage of the Prohibition to make his fortune.) Will she find her father welcoming? Will he be happy to see her? Will knowing him change her life for the better? And can she ever hope to get along with her older half-brother, Charlie?

Astrid Donal is Charlie's girlfriend. Though, she claims to love him--and he claims to love her--this isn't the perfect relationship. There are jealousies on both sides, friction and tension. Astrid meets Cordelia on her first night at the mansion. And Astrid takes to her right away--true this distraction gets her out of a difficult argument with Charlie--but the two become good friends very quickly. What does Astrid want most in life? Perhaps not to be like her mother. Astrid is tired of her mother's selfishness. How her mother uses men and their money. There's definitely more to Astrid than what appears. Yes, she's a "flapper." But she's so much more than that.

I enjoyed this one. I liked the setting--the atmosphere. I liked the characters too. It was interesting to see the relationships develop, the story develop. There is romance and mystery and fashion.

© Becky Laney of Becky's Book Reviews
Posted by Becky at 8:56 AM

Labels: 2010, borrowed book, HarperCollins, YA Fiction, YA Historical Fiction, YA Mystery, YA Romance