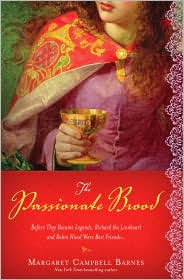 Passionate Brood: A Novel of Richard the Lionheart and the Man Who Became Robin Hood. Margaret Campbell Barnes. 1944/2010. Sourcebooks. 368 pages.

Passionate Brood might not be for every reader, but it is an enjoyable historical novel all the same. It focuses on Richard the Lionheart, the king of England who cared more about his crusades than the welfare of his own country. It focuses on the spirited (and quite dysfunctional) Plantagenet family. We get glimpses of Richard, John, and Johanna--three of the children of Henry II and Eleanor of Aquitaine. (Others are mentioned here and there, but we get more from these three--particularly Richard and Johanna.)

Did I like it? Yes and no. On the one hand, it's an interesting story. It follows Richard's adult life--his 'exile', his crowning, his crusades, his battles, his marriage, his private life. We get a glimpse of a man raised as Richard's foster brother who "becomes" the Robin Hood of legend. Though this isn't his story. While Robin is "being" Robin Hood--readers are stuck with Richard and his wife, Berengaria, in the crusades. We see this husband and wife quarrel. Again and again.(Where Robin does come into the story is his raising the money to ransom Richard.) If you're looking for a happy story with a happy ending--a historical romance--this is not the one for you. I'm not sure I liked Richard. I'm not sure he made the best decisions for himself, for his wife, for his country. I found his obsession a bit tiring. I definitely found myself agreeing more with Robin who refused to go on the Crusades because he thought it was a waste--of time, of energy, of money, of lives.

While I've enjoyed other Margaret Campbell Barnes titles more, I would still recommend this one to those that like reading historical fiction.

© Becky Laney of Becky's Book Reviews
Posted by Becky at 9:34 AM

I liked this one a lot. I am not sure that the Robin Hood aspect was in the book enough to warrant it being part of the subtitle of the book though.