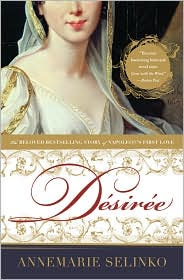 A woman can usually get what she wants from a man if she has a well-developed figure. So I've decided to stuff four handkerchiefs into the front of my dress tomorrow; then I shall look really grown up. Actually I am grown up already, but nobody else knows that, and I don't altogether look it.

It follows the life of a young girl, Eugenie Desiree Clary, who happened to be the "first love" of Napoleon Bonaparte. Their engagement was broken--not her choice, by the way--when he married Josephine. Awkwardly enough--at least at times--the two remained connected through the years for her sister, Julie, had married his brother, Joseph.

She may not have married her first love. But. She did marry--and marry well. Jean Baptiste Jules Bernadotte. Though at the start no one knew how well. For her husband was adopted by the Swedish monarchy. He was chosen to be the heir to the throne. Years after the two marry, they become royalty. His royal name? Charles XIV John.

I found Desiree to be tedious in many places. As it follows the rise and fall of Napoleon. As it follows her marriage--many of which she was separated from her husband either by choice or necessity--through the decades. There were places where it worked. Places where it seemed personal, genuine. But, for the most part, I felt disconnected from Desiree as a narrator. The novel is "her diary." That is how it is presented at any rate. But. After her first disappointment with love, after her marriage, the "diary" becomes more a brief and uneven record of political and social struggles she faced as her husband fell in and out of favor with Napoleon.

Desiree was not a romance--at least not a traditional romance. Yes, the first part of the novel sees a young woman in love with love, in love with an ambitious nobody with a strange name. But the rest of the novel? Not a romance. Instead, it's a detailed account of turbulent years in France. I did not find that account particularly compelling. But maybe I'm not the right reader for this one!

© Becky Laney of Becky's Book Reviews
Posted by Becky at 8:47 AM

I love historical fiction, thanks! for sharing this.

Love your historical fiction selection. I'll check out many books from your list.