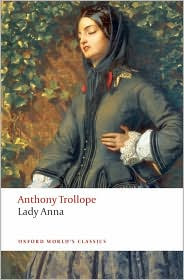 Women have often been hardly used by men, but perhaps no harder usage, no fiercer cruelty was ever experienced by a woman than that which fell to the lot of Josephine Murray from the hands of Earl Lovel, to whom she was married in the parish church of Applethwaite,--a parish without a village, lying among the mountains of Cumberland, on the 1rst of June 181-. That her marriage was valid according to all the forms of the Church, if Lord Lovel were then capable of marrying, no one ever doubted; nor did the Earl ever allege that it was not so.

While I didn't love the cover, I did love the novel. (Doesn't it look like Lady Anna has a terrible pain in her side? Well, in a way, she does. The pain being her mother.) I almost don't know where to begin.

Did I like it? I loved it! I just LOVED it. Trollope did not disappoint.

Countess Lovel ("Josephine Murray") has spent decades in court trying to "prove" to the world that her marriage was valid. (That Earl Lovel did not have a living wife when the two were married in that small parish church). Also that her daughter, Anna, is legitimate. That being rightly the widow and daughter of the late Earl, they should not only receive their inheritance, but their titles as well. That Countess Lovel should legally be recognized as Countess. That Lady Anna be recognized as Lady.

But fighting this legal battle is not cheap. And the Countess has not had the money to pay for it herself. When it comes down to it, if it hadn't been for the generosity of the Thwaite family--father and son--the two would not have lasted as long as they have. They have spent most of their lives depending on his money to survive. Daniel, the son, has grown up with Anna. And the two are extremely close. The best of friends. So it's only natural for these two to fall in love with one another, right? Why wouldn't Anna love her best friend, her defender, her provider?

As the legal case progresses, problems arise. That is in finding a compromise, a solution, the difficulty for our heroine arises. Everyone thinks it's a brilliant idea if Anna marries the Earl of Lovel--the young man who has inherited the title. She'll bring the money from the late Earl's estate if her inheritance is proven. He'll bring the title. It would be a perfect match--a flawless one at least on paper. But Anna's heart isn't in that match.

Her heart belongs to Daniel Thwaite, a common working man, a tailor, a Radical too. She has promised to be his wife. And for Anna there can be no breaking of that promise. First, she loves him truly. Second, she's a woman who keeps her word. And the truth is, Daniel wooed her when she had nothing. Daniel's actions match his words. He's proven his worth time and time again. He says what he means, and he means what he says. And this young Earl, well, he is handsome, it's true, and he says the right words--words that might prove tempting to just about any woman. But she knows that these words are at least in part prompted by her (forthcoming) wealth. He seems nice enough. But then again, he is on his best behavior. He's trying to impress her after all. The most Anna will admit is that if they'd met before she'd fallen in love with Daniel--then things might have gone differently.

This match outrages almost everyone. Lady Anna marry a tailor?! Well, that's unthinkable?! How could she--a fine Lady--marry anyone outside her class, her rank? There are many--including her mother--who will try to argue with Anna throughout the novel, will try to threaten her even, to get her to marry the "right" man. Will Anna give into the pressure? Or will she stay true to her lover?

I read this one as part of the Anthony Trollope Classics Circuit Tour.

© Becky Laney of Becky's Book Reviews
Posted by Becky at 12:30 AM

Another one on my shelf that I look forward to reading even more after your review. Incidentally I think the picture the cover comes from has this young lady on one side of a wall overhearing her lover wooing another young lady on the other side of the wall. Hence the pained expression and pose...

This is the first classics circuit I've taken part in and I'm finding it very inspiring, so I hope it's not my last...

Another Trollope to add to my list! I'm reading Barchester Towers now and I want to read the whole series. And pretty much everything else he wrote.

Fun review--I just read a pretty negative review of another Trollope, but this sounds v interesting.

I like your turn of phrase in the review--well-done :)

Ah, family pressure in choice of suitor - I've read many a one like this!

I'm sure it all turned out well in the end though ;)

Trollope does such a wonderful job of creating realistic characters. I will have to read this sometime, after I finish the Palliser books. Sounds like it addresses some wonderfully interesting Victorian issues.