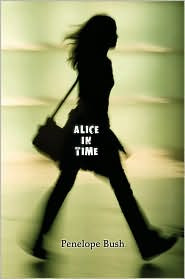 "I'm not wearing it."
"Yes you are."
"No, I'm not."
Repeat those last two sentences about fifty times and you'll get some idea of what I'm up against. I'm trying to get my little brother into his page-boy outfit so that we won't be late for Dad's wedding, but I've been trying for the last hour without success.

I picked up Alice in Time because I was interested in the time travel premise. Alice, our heroine, is fourteen and miserable. She thinks her life is ruined, and it just happens that everyone else is to blame for all her woes. Her parents are divorced. Her relationship with her dad and his new wife, a bit awkward. And her brother, well, he's a bother and then some. Her mom is the worst of all. Even Imogen, her best friend, doesn't understand her. It seems the whole world is against her...

One late night in the park, a spin on the merry go round, a little accident ends up changing Alice's life forever. She wakes up from the accident as a seven year old. Her teenage memories are intact, but she's now seven again. She's forgotten how to be a kid, though, which makes this transition a bit tricky. Her mom definitely does NOT like the new Alice, who has turned mean and disrespectful and disobedient. What happened to her little angel that loves playing with Barbie and needed help brushing her hair and braiding it?

Of course, Alice doesn't really know what the consequences of any of her actions will be... One thing is for sure, this new-new Alice will be a different girl.

I liked Alice in Time. I didn't love it; I didn't hate it. I thought it took a little too long to get to the merry go round. Though that could be just me, since the time travel element is what I was most interested in. And Alice wasn't very likable. She was a brat. A full-time brat. But as she began to grow up a little (by growing down), I began to like her more and more.

This went on my tbr list the moment I read about it! It sounds fun, despite Alice's brattiness...

Sounds like an interesting premise for a book, though I'm not sure it's right for me. There's nothing I hate more than a bratty teenage protagonist! Great review!

I think the main character would annoy me too much to read this book...