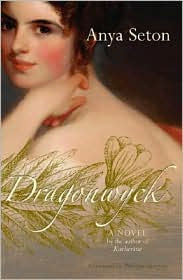 It was on an afternoon in May of 1844 that the letter came from Dragonwyck.

Miranda Wells is the foolish heroine of Anya Seton's Dragonwyck. This farm girl has much to learn, and her trusting nature combined with her restlessness is just asking for trouble. The novel opens with Miranda being invited to visit her cousin, Nicholas, and his wife, Johanna, and their daughter, Katrine, in their home, Dragonwyck. Though cousins, the two have never met. For the Van Ryn's are quite wealthy, and the Wells are at best poor relations. But the couple appears--at first--to be looking for a companion for their daughter. Someone not quite a servant, but not quite a real guest either. The wealth and luxury of their lifestyle--especially in comparison to the only lifestyle she's ever known--life on a farm has Miranda thoroughly charmed. Everything that Nicholas says and does just wows her. He seems to be so perfectly, perfect. She just can't help herself, she finds herself falling for him. On her part, I do feel it's just silliness, with more innocence to it than real intent to break up a marriage. But the wife, well, she is unhappy and uncomfortable with Miranda being there. She didn't expect her to be so young, so beautiful, so ready to be charmed by her husband.

So do you think Miranda lives happily ever after with Nicholas?!

It's true I was never bored with Dragonwyck. But I also never found true satisfaction with it. Miranda was a frustrating heroine, to me, because she was just too stupid immature. She wasn't all that smart, and she wasn't all that good. (With goodness being a virtue.) There was very little to love in Miranda. That being said, I definitely felt something for her. I pitied her. Miranda's choices weren't all that smart. But NO WOMAN deserves to be treated the way she was treated. And I definitely wanted Miranda to be saved--to either save herself or to be rescued by some good soul. Nicholas. Well, what can I really say about him?! I didn't find him appealing at all. It was just so easy for me to hate him. His flaws are too many to even begin to list. And his strengths? Well, I can't think of any!

Have you read Dragonwyck? What did you think of it? Did you like it? love it? hate it? Do you think it's fair to compare it to Jane Eyre and Rebecca? I definitely see how Dragonwyck is a gothic romance.

Here's the part where I disagree with her:


Johanna is a wonderful thumbnail portrait of a woman whose death we are not going to mourn. Her greed, illustrated in the first moment we meet her when she demands to know if her husband has brought her pastries from town, is wonderfully described. Seeing Johanna, with crumbs on her gown and half-eaten dishes in her room, puts us neatly on the side of Nicholas and the guilty lovers. We are prepared for Johanna's death, and we don't mind when it happens.
By the time Nicholas comes to marry Miranda, Seton has so arranged our sympathies that we are as keen for the marriage to proceed as is Miranda. And so we forgive Nicholas for our suspicion of murder and Miranda for her desire for Nicholas and cupidity for his life. In addition, we agree with Miranda that the farm is a poor place. We forgive both Nicholas and Miranda because we are as bad as they. We don't mind that Johanna is dead, and we want to see Miranda live the high life. (339-340)

It is Nicholas who dominates the book, of course, and it is he who lingers in the mind after the book is finished. What a wonderfully gothic, nightmarish hero-villain he is! He is handsome and beautifully dressed; he is stylish and wealthy. He is absolutely exceptional, and we know this before he even enters the pages of the novel because Seton has the crowd murmur his name before he arrives. He delights us at once. He circumvents Miranda's father, which pleases us since we want to see her freed. He sweeps her away to his home, and his home is a wonder. We think, like Miranda, that he could be saved by true love. We despise his fat wife; we have hopes for his future. (341)

I don't only disagree with her a little, I disagree a LOT. (I might have exchanged a few words with the book.)

I have always meant to read Anya Seton, but I haven't actually accomplished it yet...

Seton has been an enjoyable read so far. This is my second of her novels I've read. I've yet to love, love, love one of her books. But her writing is anything but boring...so I haven't really minded just liking them :)

I read Dragonwyck a while ago and I felt the same as you. I was never bored with, but it didn't blow me away either. It was an ok read and I will try another of her novels in the future.