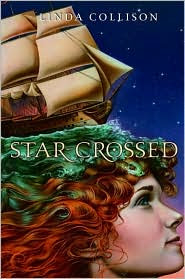 I came aboard with the prostitutes the night before the ship set sail. It was a rash scheme, but I was a brash girl with nothing to my name but a promise.

Patricia Kelley, the heroine of Star-Crossed, was a great annoyance to me throughout the book. I wanted to be honest about that from the start. I don't think that you'll necessarily agree with me on that. And I wouldn't be surprised if others liked this one a lot more than I did.

Some people might not find a stupid clueless heroine such an annoyance. (Star-Crossed reminded me of Emma's Harriet.)

Our heroine is the illegitimate daughter of a gentleman who owns a sugar plantation in Barbados. Perhaps her impressions of her father have been 'helped' by the distance between them, perhaps her impression of him remains what it was when she was still six years old and living at the plantation where she was born. She's spent ten of her sixteen years away at a boarding school in the English countryside for 'gentlemen's daughters.' She believes with all her heart that this school is only for the very, very, finest young ladies. (I'm not completely convinced.) She seems to have complete confidence in the fact that she--the daughter who does not even bear his name--will inherit the plantation. You see, she's learned that her father has died. And she's convinced that if she can just go herself to Barbados, to the plantation, then NATURALLY, everything will go her way.

Not having any money or any friends, she resorts to disguising herself as a prostitute and going on board the merchant ship destined for the West Indies. She's discovered, as might be expected, by a sailor, Brian Dalton, who befriends her. But it is only the fact that she is saved by Dr. MacPherson that keeps her on board after their first stop--for either the captain or the owner--not quite sure which--is very angry to have a stowaway. MacPherson agrees to pay for her passage if she'll be his 'loblolly boy.' She agrees. During the day, she's his assistant. At night--in the early morning hours--she sneaks out of the cabin to find Dalton. He's a most kissable boy when no one is around to see her questionable behavior. She decides she likes some aspects of living at sea. She likes dressing as a boy and playing at doing the work of a sailor--when it's convenient, when there's a cute guy around, etc. BUT for the first third of the novel, she's living in a fantasy world where arriving in Barbados will make her every dream come true. It's not that no one on board is asking her exactly what her plan is, for they all seem to be living in the real world, it's just that our heroine insists that she doesn't need a plan to get what is hers.

Another issue I had with this one is that I kept having shouting matches at the heroine. It was SO VERY EASY to shout at her. Not that it did any good. It didn't make her any smarter. It didn't make her have even a little common sense. But I felt better while I was reading it.

So. I didn't hate this one exactly. It could have been MUCH worse. For one, if it had been an adult romance novel, it probably would have included attempted rape/rape scenes. And the doctor would have offered "protection" from other men on the ship--at a cost. So. At least this book wasn't predictable in that way. It was historical adventure with romantic elements. (I didn't find the romantic story enjoyable, but other readers may.) The heroine rather reluctantly perhaps becomes a spunky adventurer/sailor. If the heroine becomes independent and free-thinking by the end of the novel, it is more by chance than design. Well, I'm not sure if that is exactly true. She may just have become better at it. While it's true I didn't like the heroine, I did like some of the minor characters, or the minor-minor characters. (There were some characters that were only in one chapter that I liked better than some of the regulars.)

So when our heroine returns to the ship actually shocked and devastated by the fact that she is NOT a plantation owner and that she has absolutely nothing to inherit; no money of her own, no place to live, no place to go, etc. She's "comforted" perhaps by two men who love her: Dalton, the boy she just LOVES to make out with. And Dr. MacPherson, a man she has no interest in making out with. Can you guess which one she chooses? Can you guess why?

Our heroine is the illegitimate daughter of a "gentleman" with massive amounts of debts and reckless gambling habits. (Her father also had other illegitimate children. Not that she knew that before she arrived to learn 'the truth.') She has such a high opinion of herself, of her place in society, never doubting FOR ONE LITTLE SECOND that she belongs to the highest ranks of society, never doubting that she is so very very superior to everyone else because her father was a gentleman. She can't understand the basic facts of the case. She is illegitimate. She doesn't share her father's name. Their relationship may have been understood in some circles, and she may been treated fairly well at that boarding school in the country. But a country boarding school isn't exactly London society. You can't very well put on your calling card, illegitimate daughter of Mr. So-and-So. The very fact that she was illegitimate would probably keep her out of the best circles in society. Add to the fact that she has NO MONEY AT ALL. Who in the world would accept a penniless illegitimate daughter into their society? Who would marry her? Who of "her class" would marry her? With NO money and no social connections? Who would "sponsor" her into society at all? Who would "introduce" her into society?

So when she rejects Dalton BECAUSE he is her INFERIOR. Well, it irritated me. Not because I liked Dalton. Not because I preferred him to Dr. MacPherson. Not because Dalton had any personality to him at all. What annoyed me was the why behind it. He's not good enough for her. He is not of her class. She thinks he's DREAMY. She loves to kiss him. She loves to daydream about him. BUT. He's just not quality enough for her. It would be one thing if she was equally attracted to the doctor. But she isn't.

The truth? She's so stuck on herself being somebody big-and-important (even though there's no basis in reality to back this up) that she doesn't see that she doesn't have money, she has no place to call home, she has no way of earning money and THEREFORE it doesn't matter "who" she is. Whether she wants a new beginning or not, she's got one. She could CHOOSE to be with the man she loves best and no one would think a thing of it. There is no society that she belongs to at the moment that would judge her or could judge her. She may think she's the center of the universe, but she's not.

So she chooses who she chooses. And, if I'm being honest, I do actually like Dr. MacPherson. (I think our heroine is not good enough for him. I think he deserved much, much, much better.) The middle section of the novel focuses on her marriage to the doctor. We see her grow--or supposedly grow--into a competent nurse or surgeon mate. I don't know if she grows in intelligence as she matures, but, there are less opportunities for her to be stupid. And, to give her the benefit of the doubt, she could be quite a bit smarter from when we first met her.

The third section of the novel is what happens after her husband dies...how she becomes 'a man' and goes to see as a surgeon mate....and you can guess who she accidentally meets....and how that develops....

That is an interesting cover, but I have mostly decided to just pass on this book...