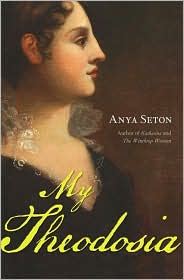 At six o'clock on the morning of Midsummer Day, 1800, Aaron Burr's estate, Richmond Hill, was already well into the day's bustle of preparation for the gala dinner to be given that evening in honor of Theodosia's birthday.

My Theodosia was Anya Seton's first novel. When possible I like to begin at the beginning with a new-to-me author. Saving the first book for the end, well, it can end in disappointment. Because if an author keeps improving, then each book will show it.

The heroine, Theodosia Burr, is the daughter of Aaron Burr. At his greatest, her father was Vice President of the United States of America. At his worst, he was a wanted man accused of murder and treason, etc. His greatest fan, by far, was always his daughter. I think he could have done anything, said anything, and she still would have been there standing by him, supporting him with every breath in her body.

I think it is important for readers to know exactly what to expect from My Theodosia. It is NOT historical romance. That is while the novel focuses on Theodosia and the men in her life--her first kiss which came from Washington Irving on her seventeenth birthday, her husband, Joseph Alston, her 'true love', Meriweather Lewis, the novel isn't love and romance and passion. And it most certainly is not about happily ever afters.

My Theodosia is historical fiction. Some who have read it might even call it "historical" FICTION. I'm not one to judge the historical accuracy--or historical inaccuracy--of a novel when I haven't read any nonfiction at all about the subject. I don't have a clue if Anya Seton's characters resemble the people they're supposed to faithfully represent. I do know that in the author's note she claims that the novel is "historically accurate in every detail." And she claims to have read all the Burr biographies, and the published letters of Aaron Burr, and some of the unpublished letters of Aaron Burr. And she claims to have had three sources for the romance between Meriwether Lewis. There are certainly plenty of reviews that say differently. That claim this novel is 100% fiction with no truth in it at all.

The historical time period covered is 1800 to 1812. And for those interested in this period in American history, the novel may prove interesting. I certainly found it fascinating. I read it in two days. And I wasn't bored at any point during the narrative. I can't say that I loved the characters exactly--they were too flawed for that. Aaron Burr being very charismatic and manipulative. But I can say that I found the story compelling and tragic. Maybe I found it fascinating because I didn't know that much. Yes, I knew about the duel. But I didn't know much else. And I certainly didn't know about Mexico. So it definitely held my attention.