No Passengers Beyond This Point (MG) 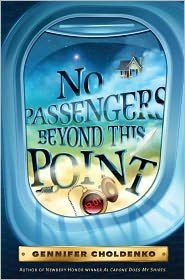 No Passengers Beyond This Point. Gennifer Choldenko. 2011. Penguin. 256 pages.

India, Finn, and Mouse are three children on their way--by plane--to their Uncle Red's house. They're not going on vacation, this won't be a short stay. No, the three will be there to stay. Their mom has every intention of joining them when the school year is through, but for now, they'll need to stick together and take care of one another. This move is sudden and not-so-sudden. It's definitely a surprise to the three kids. To the mom? Well, she's been fighting to save her home from foreclosure for the past six months. And then the fight is over, and she's lost. Now she has to tell her kids they'll be going to stay with Uncle Red in Colorado, they'll be leaving the next day. No time to say goodbye to their friends. No time to pack up their belongings properly. No, one suitcase a piece is all they'll be taking with them. This move seems so crazy, so weird. Yet it's the sanest part of the book, perhaps?!

After the first fifty pages, well, No Passengers Beyond This Point reads like an episode of The Twilight Zone. For those that love realistic fiction--and only realistic fiction--this may be an unpleasant surprise. For those that love a bit of fantasy and mystery, well, this change may be quite welcomed. (Is it a difficult mystery to solve? I'm not a good judge of that. I certainly began putting the pieces together early on, BUT that doesn't mean it won't be suspenseful to kids. And even though I had a good idea on where this one was going, it didn't take the fun out of reading it.)

No Passengers Beyond This Point is narrated by Finn (middle child), India (oldest child), and Mouse (youngest child). And I don't always love appreciate it when authors do this. Multiple narrators can be a big disappointment at times. They can keep me from connecting with a book. They can keep me from getting to know any of the characters well enough. BUT. I didn't have a problem with it in No Passengers Beyond This Point. In fact, it was one of the novel's greatest strengths. Which narrator would I want to give up??? NONE OF THEM!!! I just loved and adored Mouse and her invisible friend, Bing. I loved seeing the world through her eyes. I loved her observations. And Finn, well, he was responsible--though worried--and was able to think things through without giving into panic. I definitely think he's a good brother for these two to have! And India, well, I might have struggled to like her at first. (Though I wouldn't say I see her exactly the same way Mouse does...) But her chapters--especially towards the end--are so INTENSE and compelling. And when it comes down to it, ALL the narrators are so important to the story itself.

So I definitely enjoyed No Passengers Beyond This Point. I loved the characters. I loved the family dynamics. I thought Choldenko did a great job with developing relationships between siblings. And, for me, the atmosphere, the setting--strange as it was--worked very well. I can't say that every reader will love it. But then again, the same is true for ANY book I review!

Some of my favorite Mouse observations:

Ever since I found out they kicked Pluto out of the planets, I have not been feeling so sure about a lot of things. If they can decide Pluto is not a planet all of a sudden like that, things are not being run the right way up top. Pluto is a planet in My Solar System on page one, page six, and all of chapter three.
My brother, Finn, who has no pimples, says that's because Pluto is a dwarf star, but Finn is wrong about this. Finn is wrong about a lot of things, but I keep quiet about how many. He is a nice big brother and I don't want to ruin him.
My sister, India, is fourteen and she's only nice when Mommy makes her. (26-27)

I do not like being way back here with Bing and Marvin. What is Marvin going to ask? I try to think of every answer I know.
"Name?" Marvin asks.
"Geneva Tompkins, but everybody calls me Mouse on account of I'm good at squeaking. Want to hear?"
Marvin shakes his head. "You're traveling with your mother."
"No," I say. "We've used up all our money. Mommy has to work because that's how she gets more. Is that how you get more, Marvin?"
Marvin writes this down on his clipboard. "Who exactly are you traveling with?"
"My sister, India, and my brother, Finn. India, Geneva, and Finland. Two countries and a city. That's me." I raise my hand. "My mother wanted to travel, but instead she had kids."
This is my grown-up joke. I got it from India. Marvin doesn't laugh.
"And your father?" Marvin asks.
"He died when I was in Mommy's tummy. I couldn't see him on account of there was skin in the way. But Bing saw him. He took a picture for me."
"Who is Bing?"
"He's my friend."
"Did you pack your own suitcase?"
"My mom and India did, only I made a few corrections."
"Which means?"
"I added the explosives," I whisper.
His face looks suddenly the color of my snot when Mommy says I have to stay home from school. "Explosives?"
"Have you ever seen mints explode? You put them in soda and Pfffffff." I make my best explosion noise, but it's not as good as Finn's.
"This is some kind of science experiment?" His voice squeaks.
"Oh, no. I don't have science yet. Not until third grade."
Marvin shakes his head and makes grunting noises. "Do you understand you aren't allowed to bring liquids on the plane? Liquids like vinegar, liquids like soda."
"I would have understood if Finn let me read the whole sign, but he said we had to--"
"You stay here," he snaps before I even finish explaining.
When Marvin comes back, Mommy, Finn, and India are with him. Marvin hands me my suitcase. It's very light. He's taken all the good stuff out. (31-32)

Now I have to go to the bathroom. But I don't want to go in a strange bathroom, so I hold it like at school. I will hold it until we get back from Uncle Red's. I only like the toilet paper at home. (42)

I'm used to knowing more than everyone else on account of Bing. He has in some knee-a, you know. You can find out a lot of things when you're awake at night. In the morning, Bing tells me everything he found out the night before. (86)

This sounds good! Thanks for the review!

This book is very, very good! I was surprised. I got off a book order form from school and it looked like one of those cheap, mediocre books, but i was VERY wrong.