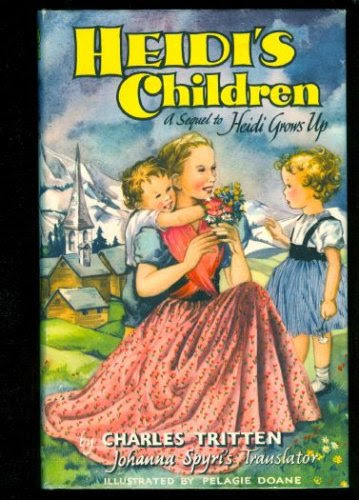 Dorfli was still enveloped in a mantle of snow, but the baker, returning from Maienfeld in his wagon, reported that down in the valley it was already spring.

Heidi's Children is, I believe, the third and final Heidi book. Heidi Grows Up, the second novel, ended triumphantly with Heidi wedding Peter, the goat herding boy she first met when she was just five. This third novel opens with Heidi just a few months away from giving birth to her first child.

Heidi and Peter live with Heidi's grandfather and Peter's mother in the village of Dorfli. (During the summer months, they retreat higher up in the mountains, though the grandfather's original hermit-hut is no more.) As they have the largest house in the village, they also have the local school teacher, Heidi's old school chum, Jamy, living with them. The novel opens with Jamy making a request of Heidi and Peter. She wants them to welcome her younger sister, Marta, into their home. It seems Marta is too difficult for her own parents to handle, and they essentially don't want to have her around...at all. Marta, of course, has figured all this out. Peter has his doubts initially, let the reader never forget how jealous and possessive he can be with Heidi, but eventually he agrees to the plan.

So Marta is the "first" of Heidi's "children" to arrive. A few months later Heidi welcomes twins into the world. A baby boy. A baby girl. And grandfather is there to welcome this next generation. He even suggests the names for both the babies.

This naming scene is funny, in my opinion. For it sees just about everyone from the village coming into their home to give advice and share gossip.


"Well, what do you think of them, Peterli?" his mother asked after he had studied their features for some time without making any comment.
"As alike as two strawberries," he answered, "and just as red. How long will it be before their eyes open?"
"They aren't kittens," laughed Heidi, looking up from her pillows. "Their eyes have already opened and they're as blue as the sky itself. They're sleeping now. Little babies have to sleep."
"Has the Alm-Uncle seen them?" asked Peter his face still thoughtful.
"Oh, yes," answered Heidi. "He was so pleased but he escaped to his own room again as soon as the neighbors came. Their chatter bothers him as it does me, but I can't ask them to leave."
"I'll ask them if you want me to," announced Marta, her eyes still fiery. "They're out there in the living room saying horrid things about everybody in the family and suggesting the most dreadful names for the babies. You won't name them anything they suggest, will you?"
"I swear it!" said Peter, raising his hand as though taking an oath. "Whatever they suggest, the babies shall surely be named something different."
Old age had not affected the Alm-Uncle's hearing, for suddenly he called out so loudly that those in Heidi's bedroom and even the neighbors in the living room beyond could hear it, "If they're her surprise, why not name the girl baby after the child?"
"After me?" said Marta, hardly believing her ears, for the Alm-Uncle had never once spoken her name all the time she had been there.
"As you say, Grandfather!" Heidi called back. "But what shall we name the boy?"
"Your father was an upright man, Heidi. It might be well to remember him."
Heidi had not thought of naming the boy anything but Peter. But since Peter objected to that, why not Tobias? She called again, "Very well, Grandfather. He shall be our little Tobi. The neighbors shall hear at the church what names we have chosen." (84-85)

Marta, Jamy's younger sister, is the real heroine of Heidi's Children. It is her story--her emotional and spiritual journey--that is told within the pages of the book. Her developing relationship with the grandfather, her love for Heidi and Peter, her finding a place to belong, etc. Her story isn't always a happy one. For she's still broken. She's mourning the loss of her grandmother. And she definitely hasn't healed from being completely rejected and abandoned by her parents.

The grandfather also plays a big part in this one. Though I don't want to spoil anything by sharing those details here. Let's just say that this is the first Heidi book where the reader catches glimpses of his past.

I did like Heidi's Children. I liked Marta. I liked how she was able to form a good relationship with the Grandfather. I liked how he was able to help her and reach her in a way that her own parents couldn't or wouldn't. It was nice to see him sharing Bible stories with her, for example. And it was nice how he helped fix her cross necklace.

I have enjoyed all three Heidi books! I do wish I'd read them sooner!

I loved all three of these books when I was a girl. I seem to remember some sort of mystery in Heidi's Children, something about the stones in the hearth?, but I don't really remember the details. If I could I'd buy a copy and re-read.

I have this sitting on my bookshelf, but I can't remember if I've read it. I think I shall have to rectify that.

I've just read the first two books and I've been searching for Heidi's children but I haven't found it yet. I really want to read Heidi's children I hope I can find it. Greatings from Mexico!

In what book does Heidi's grandfather die? I remember as a 10 year old crying.

Nancy, it is this book, Heidi's Children. The scene is very emotional!