BBC's Five Children and It 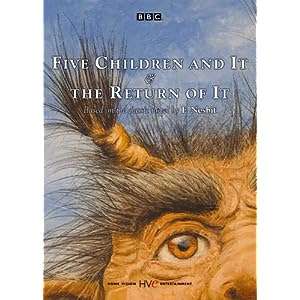 So after reading The Story of the Amulet, I didn't want the adventure to be over. So I decided to begin again! I decided to reread Five Children and It. And in my searching of the library catalog, I discovered that they had a BBC production of this one filmed in 1991. So I braved it.

I watched it this weekend, and, for the most part, I liked it.

I liked it it because it was very faithful to the novel. Yes, two wishes have switched places with one another. And yes, one wish has been left out completely--a choice that I feel was best since it was the "I wish there were Red Indians in England, just the right size for us to fight..." wish. Which leads to this nonsense in the book:


It is wonderful how like an Indian you can make yourselves with blankets and feathers and coloured scarves. Of course none of the children happened to have long black hair, but there was a lot of black calico that had been got to cover school-books with. They cut strips of this into a sort of fine fringe, and fastened it round their heads with the amber-coloured ribbons off the girls' Sunday dresses. Then they stuck turkeys' feathers in the ribbons. The calico looked very like long hair, especially when the strips began to curl up a bit.
'But our faces,' said Anthea, 'they're not at all the right colour. We're all rather pale, and I'm sure I don't know why, but Cyril is the colour of putty.'
'I'm not,' said Cyril.
'The real Indians outside seem to be brownish,' said Robert hastily. 'I think we ought to be really red -- it's sort of superior to have a red skin, if you are one.'
The red ochre cook used for the kitchen bricks seemed to be about the reddest thing in the house. The children mixed some in a saucer with milk, as they had seen cook do for the kitchen floor. Then they carefully painted each other's faces and hands with it, till they were quite as red as any Red Indian need be -- if not redder. (213-14)

So the adventures were very much from the book, and the dialogue, in many places, seemed to come directly from the book. So that was nice.

I liked this adaptation in spite of the bad, bad, bad music. The opening credits and the end credits were especially AWFUL. The end credits had the Sand Fairy singing a song, I was so worried that this song would find its way into my head--into my memory--that I fast forwarded them for the most part. Nothing gets me grabbing for the remote faster than a singing Psammead!!!

As for the special effects, well, I didn't mind the way the Psammead was portrayed. It could have been much, much worse! There were moments I found his interactions with the children charming and just right--in a match the mood/tone of the book way. But then there were moments that annoyed me too. Like the way he "breathed" out his wishes and wiggled his arms. But. For the most part, I was pleased with this aspect of the adaptation.

Have you seen this one? What did you think?

What a coincidence! We just watched the movie version (from 2004). The kids really liked it and wanted more. I thought it was a little weird, but O.K. I'm going to look for these "episodes" though (for the kids). I hadn't realized it was based on a book by Nesbit, so that's what I really want to check out!

Becky, I read this book when I was a little girl living in Beirut, Lebanon and attending a British school. I loved it so much, but somewhere through the years I've lost my copy of it. I'm strongly considering buying another one. It's been years since I read it!

I'd love for you to participate in a new bloghop, Bookish Images Monday. Stop by my blog to find out more...
Cindy @ Cindy's Book Club