The Autobiography of Mrs. Tom Thumb 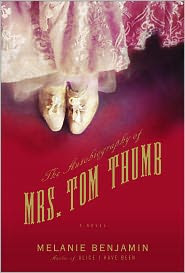 I suppose it would be fashionable to admit to some reservations as I undertake to write the History of My Life. Popular memoirs of our time suggest a certain reticence is expected, particularly when the author is female. We women are timid creatures, after all; we must retire behind a veil of secrecy and allow others to tell our stories. To that, I can only reply, "Rubbish!" I have let others--one other, in particular--tell my story for far too long. Now is the time to set the record straight, to sort out the humbug from the truth, and vice versa.

Mercy Lavinia Warren Bump (Vinnie) is the star of Melanie Benjamin's novel The Autobiography of Mrs. Tom Thumb. The novel begins with a quick reflection of her life mentioning her celebrity wedding with Tom Thumb (Mr. Charles Stratton) and honeymoon. (On their honeymoon tour they stayed over at the White House.) They married during the Civil War, but their wedding was THE BIG STORY of the day. For some the details of what she was wearing, of what she was buying, was more important than news of the battles. But the novel soon goes back to the beginning of the story. Readers learn of her childhood, of her school years, of her one (or possibly two terms) as school teacher before she was "discovered" and left her quiet life for show business.

Her first exposure to the 'real world' to show business, may not have been the best. (But it could have been a lot, lot worse). But she was determined to be somebody, to be somebody no one would ever forget. A dream that led her to writing P.T. Barnum. And she did indeed become famous! Her fame only grew when she married General Tom Thumb.

The novel focuses on her life, on her relationships. Specifically her relationship with P.T. Barnum. There were many, many things she loved about her life, about being famous, about touring and performing. But she didn't love everything.

The novel, this fictionalized autobiography, is a reflection. It shows a grown woman reflecting on the choices she's made in her life. And one of the things she regrets in this novel is the fact that she brought her younger sister with her into the world, into her crazy touring-and-performing life. She blames herself for her sister's death.

I found the novel fascinating. I found it impossible to put down. It was so captivating, so emotional, so exciting.

Great review! I've been looking forward to this one. I really enjoyed her book Alice I Have Been.

Wasn't this great? It's one of my favourite reads of the year!

A fictionalized autobiography of a real person. Dangerous yet fascinating.

This sounds like a great read! I love the idea of her reclaiming her story.

I'm so glad to hear that this was good! I heard an interview with the author on NPR and have been curious about it ever since!

I loved the interview! I have always known who Tom Thumb was, but I knew next to nothing about his wife. I am very anxious to read this book. How thrilling it must have been to research it!
mom1248(at)att(dot)net

I really enjoyed this one. Vinnie and her family and situation was so interesting to me. I couldn't put it down either!

I just finished reading this and was amazed! Really held my attention and was disappointed when I got to the last page, not because of how it ended, just that it was the end. This is definately one I would read over and over.

oh i loved this book too! sorry I am late commenting but my computer crashed and I wasn't around for a few days... loved this book..found it very interesting.