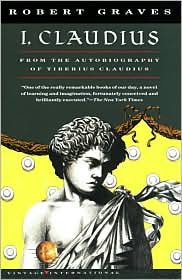 I, Tiberius Claudius Drusus Nero Germanicus This-that-and-the-other (for I shall not trouble you yet with all my titles) who was once, and not so long ago either, known to my friends and relatives and associates as “Claudius the Idiot,” or “That Claudius,” or “Claudius the Stammerer” or “Clau-Clau-Claudius” or at best as “Poor Uncle Claudius,” am now about to write this strange history of my life; starting from my earliest childhood and continuing year by year until I reach the fateful point of change where some eight years ago, at the age of fifty-one, I suddenly found myself caught in what I may call the “golden predicament” from which I have never since become disentangled.

This was an impulse read--or reread. I first read it in 2008 and I liked it. I didn't quite love it. I remember thinking at some point I want to read the sequel, one day I want to finish the story. But I wasn't in a rush. Obviously. But a few weeks ago, I saw it on the library shelf, and, well, I just HAD to read it. (I picked up both books because of course I wanted to read them both.)

What did I think the second time through this one? Well, I just LOVED it. I just loved, loved, loved it. Perhaps because I've changed as a reader. Perhaps because I knew the basic story and was free to enjoy the details more. I don't know why some books are just better the second time around. I would say the biggest difference--for me--was that there was no confusion the second time round. I wasn't lost with the names, I wasn't struggling with piecing together the story. The more I read, the more right it felt.

Narrated by Claudius, I, Claudius is an often bloody memoir of the Roman empire under Augustus, Tiberius, and Caligula. (It might reference pre-Augustan Roman history, but it does so in a flashback kind of way.) What can I say about this one? The narration varies between being very witty and dry and sarcastic and just downright fun in that sort of way. But I won't lie either. There are hundreds of names from first to last. Some turn out to be key players, some disappear a page or two later--and it's hard to distinguish between the two. I did get lost in more than a few places trying to puzzle out who was who. But at the same time, it was enjoyable. Even though I didn't pick up on every single little detail, what I did pick up on and follow I enjoyed for the most part. The book is full of politics, plots, crimes, murders, and plenty of drama both small and grand in scale. Claudius had three wives and two main mistresses, for example, (one at a time though) and a few of them were truly scary. Livia, Claudius's grandmother, is one of the stars of the novel. She's a truly despicable character--poisoning and plotting to kill off most of the opposition even if the opposition were completely innocent and were her own flesh and blood.

I ABSOLUTELY LOVED this and the sequel Claudius the God. The greatest historicl novel ever written in my opinion.
I recently watched the 1976 12 hour BBC series. Brilliant, quite brilliant as it was an ambitious novel to adapt to TV.
I shall be giving the novel a revisit as it was also 2008 when I first read them!

I thought the book was great but the middle third or so was almost like a history textbook in places. I know the author was an actual historian. Great review!