Shadow and Bone (YA) 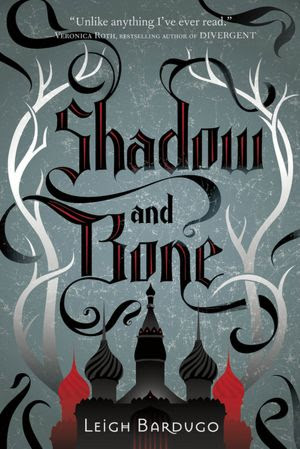 The servants called them malenchki, little ghosts, because they were the smallest and the youngest, and because they haunted the Duke's house like giggling phantoms, darting in and out of rooms, hiding in cupboards to eavesdrop, sneaking into the kitchen to steal the last of the summer peaches.

I really enjoyed Shadow and Bone. I'm not sure that I loved it. But I definitely liked it. The prologue was very promising. Almost too promising. Because I'm not sure the prologue matches the rest of the novel. Readers are introduced to two young children, a boy (Mal) and a girl (Alina) who have a very close, very special bond. The novel starts when these two are all grown up. Readers learn that he has become a soldier and that she has become a mapmaker. The two are about to venture into a dangerous unknown, the unsea, the Fold. Not alone, of course, they are just two of the people taking part in this expedition. But it will change their lives, for better or worse. For in fighting for her life, for the life of her best friend and not-so-secret, secret crush, Mal, her power is revealed. She is a sun-summoner. This puts her on one path and Mal on another...and it is the start of a dangerous, exciting adventure.

I found this one entertaining; it was easy to read. The world-building isn't the absolute best I've ever read. I didn't really try to match this fantasy world with the real world, to find parallels between the fictional world and the real world in terms of legends, mythologies, etc. I've read reviews that do, that find fault with this book for getting it wrong. I didn't read the book with that in mind. I wouldn't know how to read the book with that in mind. Did I find the story entertaining? Yes, for the most part. Did I like the characters? Yes. I thought Bardugo did a good job with Alina, the Darkling, and Mal. Several other minor characters had potential as well. Did it work as a romance? Well, it had potential. The Darkling was a fascinating character, in my opinion. And Mal, well, he was heroic enough certainly. The romance didn't wow me, but, I don't have to be wowed to enjoy the novel. It's good enough if the romance doesn't annoy me.

Read Shadow and Bone
© 2012 Becky Laney of Becky's Book Reviews
Posted by Becky at 8:30 AM

Just received an ARC of the UK version of this one. Have to say I think I prefer this cover and title. Still looking forward to starting it though.