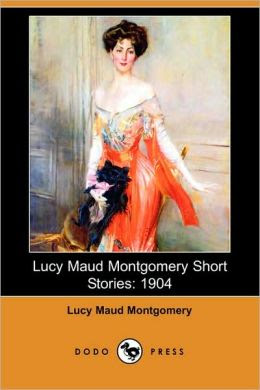 This is the third L.M. Montgomery short story collection I've read and reviewed this month. (The first covering 1896-1901; the second covering 1902-1903.) This collection features eighteen short stories: "A Fortunate Mistake," "An Unpremeditated Ceremony," "At the Bay Shore Farm," "Elizabeth's Child," "Freda's Adopted Grave," "How Don Was Saved," "Miss Madeline's Proposal," "Miss Sally's Company," "Mrs. March's Revenge," "Nan," "Natty of Blue Point," "Penelope's Party Waist," "The Girl and the Wild Race," "The Promise of Lucy Ellen," "The Pursuit of the Ideal," "The Softening of Miss Cynthia," "Them Notorious Pigs," and "Why Not Ask Miss Price?"

It is always interesting to read her short stories. I noticed in this collection in particular that there were several ideas or themes that were later developed more fully and used in several of her novels. For example, "The Promise of Lucy Ellen," reminded me of the West sisters in Rainbow Valley. And "Miss Sally's Company" reminded me of Miss Lavendar from Anne of Avonlea.

The story I loved MOST of all is "Them Notorious Pigs." Here is how it begins:


John Harrington was a woman-hater, or thought that he was, which amounts to the same thing. He was forty-five and, having been handsome in his youth, was a fine-looking man still. He had a remarkably good farm and was a remarkably good farmer. He also had a garden which was the pride and delight of his heart or, at least, it was before Mrs. Hayden's pigs got into it.

Mrs. Hayden is a widow raising two young children and struggling to keep up with her new farm. After the pigs get into Mr. Harrington's garden one too many times...he loses it...


Harrington had never seen his neighbour at close quarters before. Now he could not help seeing that she was a very pretty little woman, with wistful, dark blue eyes and an appealing expression. Mary Hayden had been next to a beauty in her girlhood, and she had a good deal of her bloom left yet, although hard work and worry were doing their best to rob her of it. But John Harrington was an angry man and did not care whether the woman in question was pretty or not. Her pigs had rooted up his garden—that fact filled his mind.
"Mrs. Hayden, those pigs of yours have been in my garden again. I simply can't put up with this any longer. Why in the name of reason don't you look after your animals better? If I find them in again I'll set my dog on them, I give you fair warning."
A faint colour had crept into Mary Hayden's soft, milky-white cheeks during this tirade, and her voice trembled as she said, "I'm very sorry, Mr. Harrington. I suppose Bobbles forgot to shut the gate of their pen again this morning. He is so forgetful."
"I'd lengthen his memory, then, if I were you," returned Harrington grimly, supposing that Bobbles was the hired man. "I'm not going to have my garden ruined just because he happens to be forgetful. I am speaking my mind plainly, madam. If you can't keep your stock from being a nuisance to other people you ought not to try to run a farm at all."
Then did Mrs. Hayden sit down upon the doorstep and burst into tears. Harrington felt, as Sarah King would have expressed it, "every which way at once." Here was a nice mess! What a nuisance women were—worse than the pigs!
"Oh, don't cry, Mrs. Hayden," he said awkwardly. "I didn't mean—well, I suppose I spoke too strongly. Of course I know you didn't mean to let the pigs in. There, do stop crying! I beg your pardon if I've hurt your feelings."
"Oh, it isn't that," sobbed Mrs. Hayden, wiping away her tears. "It's only—I've tried so hard—and everything seems to go wrong. I make such mistakes. As for your garden, sir. I'll pay for the damage my pigs have done if you'll let me know what it comes to."
She sobbed again and caught her breath like a grieved child. Harrington felt like a brute. He had a queer notion that if he put his arm around her and told her not to worry over things women were not created to attend to he would be expressing his feelings better than in any other way. But of course he couldn't do that. Instead, he muttered that the damage didn't amount to much after all, and he hoped she wouldn't mind what he said, and then he got himself away and strode through the orchard like a man in a desperate hurry.

Something changed after their meeting...Mr. Harrington finds himself wishing that those pigs would get in again...because he would LOVE to see her again...

I also LOVED The Girl and the Wild Race. Mrs. Theodora Whitney desperately wants Judith to get married. (She is twenty-seven after all.) Mrs. Whitney feels that Eben King would be the perfect match for Judith. He is her choice for Judith. But Eben King is NOT Judith's ideal. Judith thinks Bruce Marshall is her "right one." When Judith overhears her aunt talking to a notorious gossiper about how horribly contrary she is and how she's unlikely to ever marry...she reacts.


"I will," repeated Judith stormily. "I'm tired of being nagged day in and day out. I'll marry—and what is more I'll marry the very first man that asks me—that I will, if it is old Widower Delane himself! How does that suit you, Aunt Theodora?"
Mrs. Theodora's mental processes were never slow. She dropped her knitting ball and stooped for it. In that time she had decided what to do. She knew that Judith would stick to her word, Stewart-like, and she must trim her sails to catch this new wind.
"It suits me real well, Judith," she said calmly, "you can marry the first man that asks you and I'll say no word to hinder."
The color went out of Judith's face, leaving it pale as ashes. Her hasty assertion had no sooner been uttered than it was repented of, but she must stand by it now. She went out of the kitchen without another glance at her aunt or the delighted Mrs. Tony and dashed up the stairs to her own little room which looked out over the whole of Ramble Valley. It was warm with the March sunshine and the leafless boughs of the creeper that covered the end of the house were tapping a gay tattoo on the window panes to the music of the wind.

Which suitor will arrive first when he hears the news of Judith's bold declaration? It WILL lead to quite a race!

I don't usually read romances, but these stories sound like a lot of fun. Thanks for reviewing them.

I'm participating in Carrie's LM Montgomery Reading Challenge at Reading to Know. Are you? Your reviews would make a great addition! I'm not a big short story fan, but your reviews make me want to read these, and do it chronologically.

I haven't read her short stories yet, but obviously I need to!