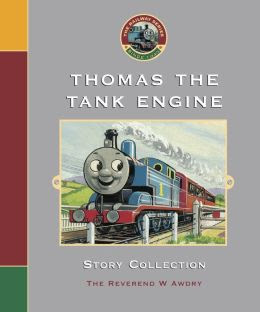 Each book contains a handful of stories. For example, Gordon the Big Engine contains four stories: "Off the Rails," "Leaves," "Down the Mine," and "Paint Pots and Queens." Henry The Green Engine contains five stories: "Coal," "The Flying Kipper," "Gordon's Whistle," "Percy and the Trousers," and "Henry's Sneeze." Tank Engine Thomas Again contains four stories: "Thomas and the Guard," "Thomas Goes Fishing," "Thomas, Terence, and the Snow," and "Thomas and Bertie."

There were certainly plenty of stories to choose from in this collection. It would have been nice to have an index to each and every story instead of just an index of the picture books. I began the book enthusiastically, appreciating the stories and the little details. By the end of the book, however, I was a bit tired of trains. I liked the writing, for the most part. There were very rhythmic places in the text that felt just right.

A conversation between Thomas, Annie, and Clarabel:

These stories may have been updated since their initial publication. I've heard that in the original stories, Sir Topham Hatt is just called "The Fat Controller." There is a "complete collection" of Thomas stories now out of print that may be be closer to the original. (It has all twenty-six picture books.)

From "Off the Rails"


Gordon was cross.
"Why should Henry have a new shape?" he grumbled. "A shape good enough for me is good enough for him. He goes gallivanting off to Crewe, leaving us to do his work. It's disgraceful!"
"And there's another thing. Henry whistles too much. No respectable engine ever whistles loudly at stations. It isn't wrong," said Gordon, "but we just don't do it." (202-3)

I picked this book up a couple of years ago at a Day Out with Thomas and my sons LOVE it! It is easily one of their favorite books. It is full of wonderful stories - and you did a great job with your review!

This brings back memories. When my kids were preschoolers, they were addicted to Thomas and his train friends. They're teenagers now. The books we read are more interesting but not as cute!