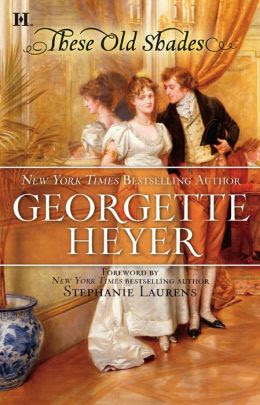 These Old Shades has a lively, impulsive, honest heroine in Leonie.  The hero, Justin Alistair, is equally unforgettable, a man with a horrid reputation with the ladies. (Among other things, he's even KIDNAPPED a lady in an attempt to get her to marry him.) He's not called 'devil' for nothing. But try telling Leonie that Justin is anything but an absolute angel! You see, he rescued her from her mean brother, he bought her. Of course, even that isn't quite what it appears to be. For Leonie was then posing as, Leon, a young man. (She'd been living as a boy since she'd turned twelve.) So Avon first meets Leon, likes the red hair and dark eyebrows, and decides the boy would be a good page. It would be useful to him to have the boy in his household...

These Old Shades has an intriguing opening and a marvelous conclusion. (The last seventy-five pages or so are just wonderful!) There are some lively conversations in between, of course. As Leon is taken to England and transforms into Leonie. As Avon tries through two women (his sister, his cousin) to teach her how to be a lady, how to dress, how to walk, how to talk, what to say, and most importantly what NOT to say. Readers are introduced to Justin's family: his sister, his brother-in-law, his brother, his neighbors, etc. Rupert, Justin's brother, becomes a playmate of sorts for Leonie. Both being immature, teasing, silly.

There are also hints of villainy throughout These Old Shades as Justin prepares to use Leonie as a weapon against one of his own enemies...

I enjoyed elements of These Old Shades. I certainly found the characters interesting. But I didn't love, love, love this one.