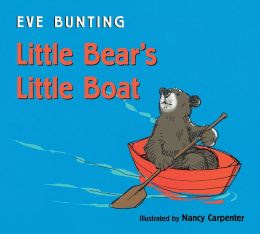 Little Bear loves sailing his boat on Huckleberry Lane. He loves, loves, loves his little boat. It is just perfect for him. But, as Little Bear begins to grow--slowly but surely--his little boat loses its just right-ness. Little Bear doesn't understand why it is his destiny to grow and his boat's destiny to stay exactly the same. But he does accept this truth and adds to it. It is the boat's destiny to find a new little bear. And it is equally important to let that new little bear know that he too will one day have to part with the oh-so-perfect little boat.  This is a charming story of growing up and letting go. 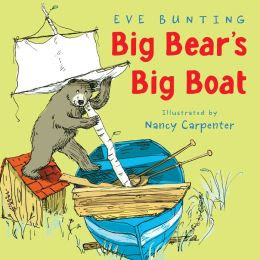 When Big Bear grew too big for his little boat, he gave it to Little Bear. Now he was building a big boat for himself.
"I want it to be just like my little boat, but bigger," Big Bear told his mother. His mother smiled, "You loved your little boat, and now Little Bear loves it. You will love your new one just as much."

Big Bear's Big Boat is a sequel to Little Bear's Little Boat. He is now a proper "big" bear, and when the book opens he is hard at work building a brand new boat--a big boat of course. And he does build a perfect boat--just the way he wants it. But. After he's finished, he begins listening to his friend. All of his friends have ideas and give him advice on how to make this boat even better. And Big Bear listens and follows... But will he be happy with his friends' vision of the perfect boat?! This little picture book has a good moral to it: "a bear should never let go of his own dream." 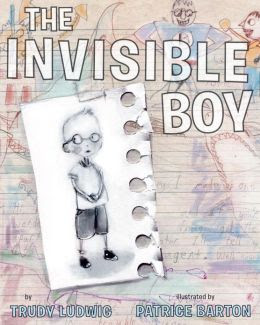 Can you see Brian, the invisible boy? Even Mrs. Carlotti has trouble noticing him in her classroom. She's too busy dealing with Nathan and Sophie.

I definitely liked this picture book. It deals with the question: which is worse--being laughed at or feeling invisible?

Brian, our young hero, is the invisible boy. He's friendless. This is noticeable even in the classroom, but especially so in the lunchroom and at recess. But when a new student comes, Brian reaches out to him--via note, I might add--and soon Brian begins to lose his invisibility. It starts with the new kid, Justin, but soon expands to include others. It has a happy ending that may seem sudden and a bit too good to be true. But it makes for a satisfying conclusion. I liked Brian and Justin. I liked the fact that Brian had strengths, that he definitely was worth knowing and worth noticing.

The book is intentional. It is packed with social lessons. It is inviting the visible and invisible kids to think about their actions, their words, their choices. None of the children are "bad" children; some are thoughtless and impulsive, but nobody is vilified into a BULLY, which I thought was a good thing. The focus is on the little things. The little things that are more accidentally thoughtless than purposefully: I'm out to HURT you. 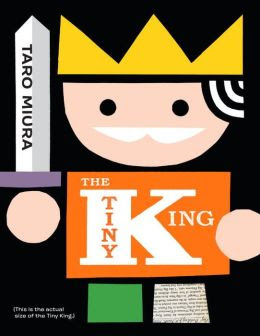 Once upon a time, in a land far, far away, there was a Tiny King. The Tiny King lived all alone in a big, big castle.

If I had to describe The Tiny King, I would say it was unusual, but unusual in a mostly good way. This picture book was first published in Japan. Candlewick is publishing it for the first time in the United States. It has a one-of-a-kind feel to it. And you'll pick up on this from the start. The cover says: THIS IS THE ACTUAL SIZE OF THE TINY KING.

The Tiny King is sad and lonely. At least he is in the beginning. But this is a happy fairy tale. He meets a BIG queen and they marry. He's soon the father of ten tiny children. And with the Queen and all ten children: his life isn't so empty and he doesn't feel so tiny after all.

The illustrations are interesting and fun. Very bright and bold. Original storytelling is complemented by original artwork. 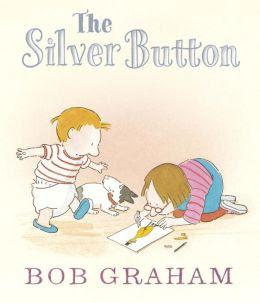 At 9:59 on Thursday morning, Jodie drew a duck. she gave the duck a top hat, cane, and boots of the softest leather. On the boots, she put silver buttons: one...two... Her pen hovered in the air before the final button.
Jodie's brother, Jonathan, pushed slowly to his feet. He swayed, he frowned, he tilted forward...and took his first step. He took that step like he was going somewhere.

Some people really LOVE Bob Graham. I am not one who "loves, loves, loves" his books. The Silver Button is an interesting look at one minute of time in the city. In that one minute, many things happen. Some, like the baby's very first steps, seem momentous. Others are very ordinary. For example, in that minute a soldier says goodbye to his mother (definitely emotional) and a little boy stops and has his shoes tied for the second time that morning (definitely not emotional). The book is seeking to capture life: a blend of simple and complex. One review calls it existential. I think this is a hit or miss book. You'll either really like it and think its brilliant or you won't. It has received plenty of starred reviews: Kirkus, School Library Journal, and Publishers Weekly.