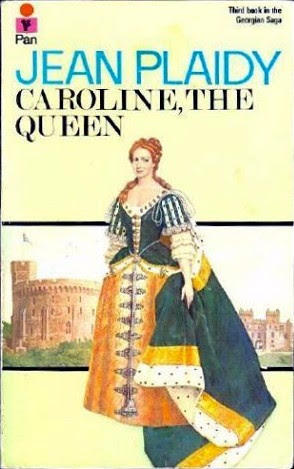 Caroline, The Queen was my first introduction to the historical writer Jean Plaidy. (It is the third book in the Georgian Saga.) The novel opens shortly before the Prince of Wales, George Augustus, learns that his father (whom he REALLY hated) has died and he is now king. Caroline, his Queen, may be the main character of this one, but she is not our only point of view--far from it. This novel tells many stories from many different points of view.

Family. The glimpses we get of Caroline and George as parents is disturbing, at least in my opinion. Frederick, the prince of Wales, is DESPISED by both of his parents. He is their oldest son, but both of his parents HATE him and wish that he'd never been born. Neither wants him around. And he knows it. He hates them both. At one point he's shown as hating his mother even more than his father because he feels his father is just being ruled. Some time is spent on their other children. But I can't say that Caroline and George were extraordinarily good parents to any of their children. Anne, the oldest girl, is given some time in the novel.

Politics. Caroline has several politician friends--notably Sir Robert Walpole and Lord Hervey. She loves power and politics and manipulating things behind the scenes so that George does precisely what they want without being wise to the fact that he's being manipulated.

The novel was quite interesting and very readable. The characters were all believably flawed; I found no one sympathetic, however. I liked this one.

I agree with your conclusions on this book. Definitely "readable" if not outstanding. But then I love historical fiction and have read many of Jean Plaidy's books (there are far too many to have read them all!) I wonder whether people who are less into historical fiction would enjoy her books though..?

Sally, I've gone on to read a handful more Jean Plaidy novels since reviewing this one! I'm trying to track down as many as I can so I can read more, more, more!

I do think you'd have to have a love of history though. But that isn't a bad thing in my opinion. Historical fiction is THE BEST.