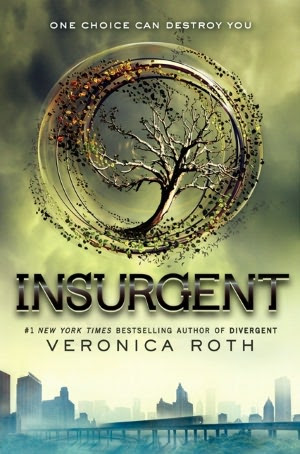 I wake with his name in my mouth.
Will.
Before I open my eyes, I watch him crumple to the pavement again. Dead.
My doing.

Reading Insurgent the first time was an experience. A book that is felt and not "just read." (My first review.) I am so glad I decided to reread both Divergent and Insurgent before the release of Allegiant later this month.

Some novels stand on their own; Insurgent is not one of them. Divergent MUST be read first. Readers may remember that Divergent had quite an ending! The last third of the novel was so intense, so action-packed, so emotional; it was impossible to put down. Insurgent picks up right where Divergent left us.

If you've not read Divergent, this review will be full of spoilers.

Tris, Tobias (Four), Peter, and Marcus (Tobias' father) on the run, on the way to unite with the Abnegation refugees seeking the mercy of the faction Amity. Tris is definitely in shock, and with good reason!!! Her mother was killed; her father was killed; she was wounded; she had to kill one of her friends, Will; she saw most of her friends mindlessly killing her old faction; she accomplished her one mission: to get the simulations shut off, but, it came at a high price. Yes, she's got Four back, but, still...a physically, mentally, emotionally overwhelming day! But her stamina cannot sustain her forever; the thoughts are coming. She is haunted by what she's seen and heard; she's haunted by what she's done, what she's chosen to do. And it's not over. She knows it. She knows the worst is still to come. There will be no easy peace. There will be no time to rest. Hard decisions will be demanded of her for days, weeks, perhaps months to come. And Tris isn't sure she's dauntless enough to handle it.

Insurgent was a WOW novel for me. I absolutely LOVED, LOVED, LOVED Tris. It's a complicated situation--very messy. And Tris is courageous and vulnerable. She's her own person. And being in love with someone else isn't going to make her mindless and compliant.