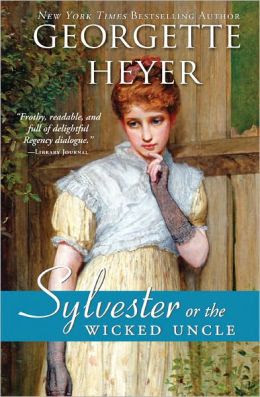 Early in the year I decided I would attempt to read all of Heyer's romance novels in order of publication. Most of the novels would be rereads, though not all of them. So far, it has been a great project! I'd definitely recommend it! The first time I read Sylvester I absolutely loved, loved, loved it. The second time, well, I seemed to be in a contrary mood. I found it perfectly pleasant, quite enjoyable, well-paced. There was not one single thing that I could legitimately fault it with, but, for some reason it wasn't WOWing me. In my memory, it was this WONDERFUL book. This balances well because there were other books that I found disappointing the first time around that I now LOVE.

From my first review:

So what is this historical romance about? It's about the sometimes-arrogant Duke of Salford. Sylvester Raynes. When the novel opens, Sylvester is having a cozy little chat with his mother. Telling her how he feels it's time to get married. He has certain things he is looking for in a wife. And he's got five women on his list that might just do. Unfortunately, love and romance don't enter into it, for him. His mother does set him right on that account at least:


'Thank you, I have heard enough to be able to give you my advice!' interrupted his mother. 'Don't make an offer for any one of them! You are not in love!'
'In love! No, of course I am not. Is that so necessary?
'Most necessary, my dear! Don't, I beg you, offer marriage where you can't offer love as well!' (13)

Sylvester then goes to see his godmother. Maybe her advice will be more useful, more practical than his mother's.

'Now, if you were only a fairy godmother, ma'am, you would wave your wand, and so conjure up exactly the bride I want!' (31)

She can't wave her wand, but she can send him to meet her granddaughter, Phoebe Marlow. The way she phrases this suggestion irritates him, still, he is in need of a wife. And she might just do after all. He had teased his mother earlier saying,

'What could be more romantic than to marry the girl who was betrothed to me in her cradle?' (22)

So off he goes to meet Miss Marlow. But his mother was right to suspect that it might not be that easy. That the girl might need to be wooed. That her son shouldn't assume that any woman would swoon and say yes to his proposal.

'My dear, has it not occurred to you that you might find yourself rebuffed?'
His brow cleared. 'Is that all? No, no, Mama, I shan't be rebuffed!'
'So sure, Sylvester?'
'Of course I'm sure, Mama! Oh, not of Miss Marlow! For anything I know, her affections may be engaged already.'
'Or she might take you in dislike,' suggested the Duchess.
'Take me in dislike? Why should she?' he asked, surprised. (22)

That conversation ends with him boasting, "Well, Mama, you said yourself that I make love charmingly!" and "I'm not hard to swallow, you know."

So who is Phoebe Marlow? She's a young woman who doesn't welcome the idea of Duke Salford coming to offer for her. The two met very briefly in London--so briefly that Sylvester doesn't even remember--and her first impression of him wasn't the greatest. In fact, Sylvester's eyebrows inspired her to write him into the novel she was writing. As the villain, Count Ugolino. (Many of her characters were inspired by people she met during her London season.) So to learn that this man is on his way to see her, to ask her to marry him, is a bit of a shock. To make matters worse, her novel is to be published! Does Sylvester read many novels? Will he recognize himself? What's she to do? Is there a way she can escape this awkward predicament? But of course! But it's not without its risk!

Sylvester and Phoebe challenge one another. And the tension between the two is just about perfect. If you like that sort of romance--think Beatrice and Benedick, Elizabeth Bennet and Mr. Darcy, Anne Shirley and Gilbert Blythe, and Margaret Hale and John Thornton. Sylvester is all about overcoming BAD first impressions.

I absolutely love Sylvester--one of my favorite Heyer's. Of course, it doesn't hurt that I have the audio version with Richard Armitage reading it--if you haven't had the pleasure, he has done 4 Heyers, and they are all wonderful, but this is my favorite.