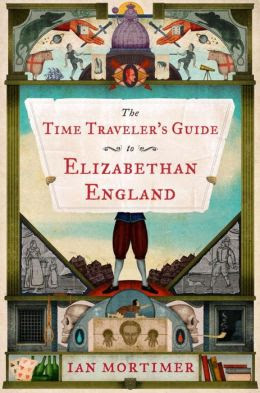 The Landscape
The People
Religion
Character
Basic Essentials
What To Wear
Traveling
Where To Stay
What to Eat and Drink
Hygiene, Illness, and Medicine
Law and Disorder
Entertainment

Each chapter is broken down into sections as well. This makes it perfect for skimming and browsing. Of course, it is a fascinating read almost cover to cover. Personally, I'm not as excited about "landscape" as I am "entertainment." But for the most part, the book was packed with interesting information and presented in a conversational way. It was easy to read. It was fun! The premise is to provide readers with the information they would need IF they were to themselves travel back in time. So the focus is different than other history books. The focus is on the ordinary and every day. It is on the little details.


"It is often said of Shakespeare that he is "not of an age but for all time" -- a line originally penned by Ben Jonson. But Shakespeare is of an age--Elizabethan England. It makes him. It gives him a stage, a language, and an audience. If Shakespeare is "for all time," then so too is Elizabeth England." (325)

The chapter "Character" is subdivided into these sections: "Violence and Cruelty," "Bribery and Corruption," "Wit," "Literacy and Printing," "Education," "Knowledge of the Wider World," "Attitudes to Foreigners," "Racism," "Scientific Knowledge," "Superstition and Witchcraft," and "A Sense of History." There is a lot of information! And 'Character' doesn't really do justice to it!!!

From the division, "Wit"


Let one more example suffice, for quickness of wit on the spur of the moment. John Manningham of the Middle Temple records in his journal for March 13, 1602, a performance of Shakespeare's play Richard the Third, in which Richard Burbage plays the title role. A female member of the audience grows so smitten with Burbage that she urges him to come to her that same night. She tells him to knock on her door and announce himself as "Richard the Third." Shakespeare overhears their conversation, and goes to the lady's chamber first. When the appointed hour arrives Burbage knocks on the door and announces that "Richard the Third" has arrived--only to hear Shakespeare reply from within: "William the Conqueror came before Richard the Third." (84)

The chapter Entertainment is subdivided into these sections: "Sightseeing," "Alehouses and Taverns," "Games," "Music and Dancing," "Literature," "The Theater."

From "Music and Dancing"


Although no one has yet conclusively proved that music is the food of love, there is little doubt that Shakespeare himself thinks it is. More than 170 passages in his plays allude to music or musicians, airs or madrigals, and nearly all do so in a positive way. The words for many songs are reproduced verbatim in the plays. (301)

There were sections of this book that I just LOVED. I didn't love every chapter equally. But what I loved, I really loved. I really only found one chapter boring.

I enjoyed this book too--like you, I enjoyed some chapters more than others, but each one had some nugget of info that made it worth reading.

This book sounds super interesting. I think I'll check if my library has it. Thanks for sharing. : )