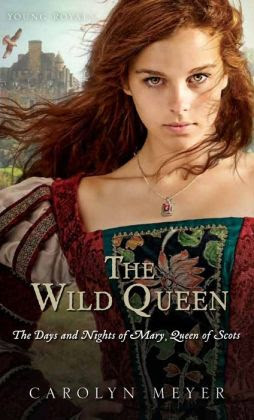 Mary, Queen of Scots, has every reason to sing the Blue-Blooded Blues...and I'll tell you for why...

Mary's story is a tragic one for many reasons. It isn't that Mary was a pure, innocent saint. It is the fact that from the time of her birth she was almost always manipulated, used, and abused; she was surrounded by power-hungry people who wanted to grasp power and control through Mary's so-called power. Surrounded by people who wanted to dictate and rule over her. Mary was crowned Queen of Scots before she was one.

The first half of the novel focuses on Mary's time in France. She was betrothed to the French dauphin from a very young age. She was raised in the French court. (She was half-French.) She was well-educated, became quite familiar with the royal household. She also got to see her French relatives (her grandparents, uncles, cousins, etc.) She marries young. All seems to be relatively fine until her husband dies leaving her a widow at age seventeen or eighteen. Then the pressure builds. Who will marry Mary next? Who will decide? Will it be her French uncles? her Scottish brothers? her cousin Queen Elizabeth? Will she decide the matter for herself?

Here, I believe, is where the tragedy begins. For Mary makes some fateful decisions with horrible consequences. Blinded by love, perhaps, or maybe just misplaced trust she chooses abominable husbands, one after the other. The good news, if there is good news to be found, is that Henry Stuart, her second husband, at least left Mary with a baby, James, destined to be James VI of Scotland and eventually James I of England. (And all monarchs ever since have descended from this line.) The last half of the novel traces her fall. If Mary betrayed the trust of Queen Elizabeth, it is perhaps the direct result of almost everyone in Mary's life betraying her first. Every person in Mary's life had an agenda. Mary's tragic flaw is that she didn't see people's not-so-hidden agendas. She trusted those who were unworthy.

I love historical fiction. I do. Carolyn Meyer happens to be one of my favorite writers. I've enjoyed so many of her historical novels! While The Wild Queen isn't my absolute favorite, it is a very good novel, a bit more mature, however, than some of Meyer's previous novels.