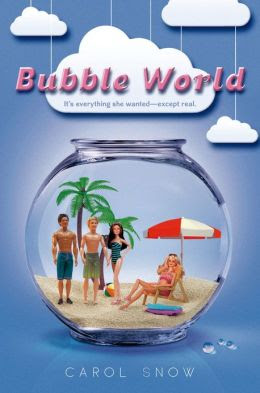 I liked many things about Bubble World. I didn't think it was the most amazing novel ever, but, as a whole, I thought it was an intriguing world. Especially if you consider the characters as products of their environment.

The main character of Bubble World is a young teen girl named Freesia (Francine). Think of some of the scenes from Clueless (especially in terms of closets and friends) and you wouldn't be wrong. Her perfect island life is what it is: completely superficial and ridiculous. It becomes apparent from the start that Freesia has never really had any uncomfortable stressful moments in her life; all ease, all pleasure, all the time. Take her school, for example, no homework, no tests, the language teachers switch to English whenever a student asks, they can have classes indoor or outdoor, again depending on what the student wants, and the whole point seems to be eating, drinking, and talking. Some of the classes Freesia takes are foreign languages, but, other courses are on applying eyeliner. It sounds over-the-top because it is. In Freesia's defense, this is her normal, this is the only life she knows, she's never questioned it because she's never been encouraged to ask real questions, her slight questions always always go in her favor. Freesia's life is essentially boundary-and-authority free. It turns out that it's not a life at all, for better or worse, when glitches occur throwing Freesia out of her perfect world, she lands in reality and it is not good news for anyone.

Her parents have spent three years or so with their daughter in a virtual reality box in a recliner, essentially dead to them as far as interactions go. Their daughter being gone is their normal. And they want to help her get back to her perfect life very, very quickly. It becomes apparent to readers that Freesia and Angel (the younger sister) have questionable parents. They seem just as selfish and clueless as Freesia at times. Sure, they live in the "real world" but the father is so stuck in the past and stuck in his ways and doesn't really care about anything but shoe insoles that it's hard to find a good role model in him. And the mother is all about promotion and popularity. She vlogs, I believe. And her online reputation is ALL that matters to her. She is definitely exploiting her daughter, in my opinion, while ignoring the basic needs of her other daughter. What the whole family needs--besides some common sense--are communication skills. Long story short, Freesia is forced due to various circumstances to spend a week or two in the real world and the shock of it all is fierce. She attends public school. She meets real teachers with real expectations (of sorts). She meets people her own age. There are so many awkward moments. She just doesn't have a clue on how to live: how to talk, how to walk, how to make friends, how to actually work. Being in the real world is putting pressure on her giving her her first opportunity to learn and grow. (For an example of an awkward moment: Freesia is completely, completely overwhelmed by stairs. She just cannot walk down them, she's too terrified. She scoots down stairs on her bottom one step at a time, and she crawls on her hands and knees back up stairs.)

The world-building was nicely done, in my opinion. The characters were shallow and stupid, but, that was part of the whole premise. Teens were drugged before entering the game, erasing their memory, and they were kept happy with drugs during the game, and the only world they knew was the created world with the shallow, materialistic focus. Their parents were essentially paying someone to brainwash their children and make them incapable of real life. For some money, they could essentially stop parenting their children, they could let go of all their responsibilities.
© 2014 Becky Laney of Becky's Book Reviews
Posted by Becky at 2:32 PM