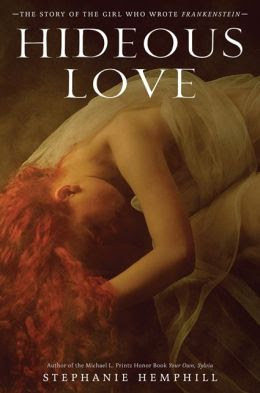 I am familiar with the story of Mary Shelley. I am probably more familiar than the target audience would be of Mary Shelley, her sister, Claire, her lover-husband, Percy Shelley, Lord Byron, etc. I took a whole semester focusing primarily on these Romantic authors. (Claire was an extra bonus. You can't cover the lives of Mary, Percy, without mentioning Claire and her lovechild.) I was curious how the story would be presented. I am not usually a big fan of verse novels. I think some work really, really, really well. And I think others are absolutely awful. This falls into the "why is this a verse novel?" category. I think the story could have been told just as well, if not better, in prose format, in journal format in particular. We do know that Mary Shelley kept a journal, of sorts.

That being said, I do think the book did a fairly good job at capturing the ANGST that is Mary Shelley's private life. Her life was a BIG, BIG MESS. Oh, what she had to put up with! Oh, what she had to endure! Oh, the consequences of leaping into love without being ready for it! As a teenager, she runs away from home with a married man, a poet or would-be poet. She takes her sister. Because she took her sister, well, her STEP sister, with her, she'll be stuck with the sister for what seems like forever. With her husband's notion of free-love this and free-love-that, the LAST thing Mary needs is another woman in their lives who is constantly there and wanting/needing attention. Mary also suffered so very many losses. So many of her children died, died in their infancy or toddler years. And some of that was just the times they lived, and some of that was due to her husband's stupidity and stubbornness. Anyway, it is an emotionally demanding story. Far from boring. Because her husband was a poet, because she spent so much time with poets, it would be nice if this format of verse novel worked in telling her own story. However, I did not feel the verse format was one of the book's strengths. If the book works, which I think it does in a way, it is because of the emotion behind the words, not the words themselves. The writing didn't seem especially lyrical or lovely or poetic.
© 2014 Becky Laney of Becky's Book Reviews
Posted by Becky at 3:08 PM

hm. I should maybe read FRANKENSTEIN first. It is on the list to finally get to this year!

Becky, it sounds as if Mary's life was brewing with turmoil. (Did this lead to the creation of Frankenstein?) It does sound as if it would work better in prose or journal form.

Kailana, you should definitely read Frankenstein. It's one of my favorite, favorite books!

Suko, I definitely think prose would have worked better!