Reread #6 Sword in the Storm 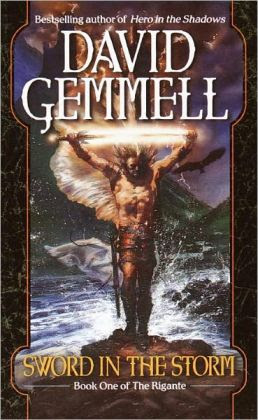 On the night of the great man's birth a fierce storm was moving in from the far north, but the lowering black clouds still were hidden behind the craggy, snow-capped peaks of the Druagh mountains. The night air outside the birthing hut was calm and still and heavy. The bright stars of Caer Gwydion glittered in the sky, and the full moon was shining like a lantern over the tribal lands of the Rigante.

I recently reread Sword in the Storm. I love it just as much if not a little more. I appreciate the characterization even more, I believe. Not many authors have the gift: the gift of bringing to life all their characters--major and minor. Not many authors trust their characters with humanity: with allowing every character to have strengths and weaknesses, of giving even the greatest heroes opportunities to reveal their flaws. That is certainly the case with Sword in the Storm.

Connavar is our young hero. One night he rescues a fawn in the woods; that night will change his life forever, for he will attract the attention of the Seidh. It will not be his only encounter, for they will follow his life with great interest offering many opportunities, but these opportunities are not without risk or cost. The idea of "Fate" definitely plays a role in this fantasy novel.

One of the things I love most about this fantasy novel is how grounded it is. Readers are presented with a whole world, whole cultures and tribes, whole communities and families. I loved spending time in this world. I loved watching Connavar grow up. I loved, loved, loved his stepfather (Ruathain), for example. Another favorite character is Banouin, a foreigner who lives among the Rigante most of the year, though he travels back and forth lands. He is a former Stone soldier; he warns Connavar that the Stone army will come, that the Stone army may be occupied with other tribes (Perdii and Gath, to name two), but the Rigante need to be aware that war is coming. I also really enjoyed Vorna for the most part. I was so pleased that she became a part of the community and the role that she played in the story.

From my first review:


Never has a book been so rich, so fully immersed in culture WHILE at the same time being so full of action and intensity. The characters are well-developed. It doesn't matter if they're major or minor. All the characters have a life, a spark of their own. Each plays a role in the drama. Each is important. The whole community--the whole tribe--is given life. His characters are so human, so believable. They're full of flaws, but they're still--for the most part--so likable. You understand them. If they do good. If they do bad. You feel you know why. You understand why. The action? Intense. Whether plotting a romance or preparing for great battle scenes, the pacing is unbelievable. All of it is so good. It really keeps the pages turning.


"May I fetch you water, old one?"
Her head came up, and he found himself looking into the darkest eyes he had ever seen, pupils and iris blending perfectly, her orbs like polished black pebbles. "I need  no water, Connavar. But it was kind of you to ask."
"How is it you know me?"
"I know many things. What is it you wish for?"
"I don't understand you."
"Of course you do," she chided him, laying aside the net. "Every man has a secret wish. What is yours?"
"He shrugged. "To be happy, perhaps. To have many strong sons and a handful of beautiful daughters. To live to be old and see my sons grow and their sons."
She laughed scornfully, the sound rasping like a saw through dead wood, "You have picked your wishes from the public barrel. These are not what your heart desires, Sword in the Storm."
"Why have I never seen you before? Where do you live?"
"Close by. And I have seen you, swimming in the lake, leaping from the falls, running through the woods with your half brother. You are full of life, Connavar, and destiny is calling you. How will you respond?"
He stood silently for a moment. "Are you a witch?"
"Not a witch," she said. "That I promise you. Tell me what you wish for."
A movement came from behind him, and Conn spun. Standing behind him was the Rigante witch Vorna. Her hands were held before her, crossed as if to ward off a blow. But she was not looking at him. She stood staring at the old woman.
"Move back with me, Conn," she said. "Come away from this place. Do not answer her questions."
"Are you frightened to voice your wish, boy?" asked the crone, ignoring Vorna.
Conn was indeed frightened, though he did not know why. But when fear touched him, it was always swamped by anger. "I fear nothing," he said.
"Conn! Do not speak," warned Vorna.
"Then tell me!" shrieked the old woman.
"I wish for glory!" he shouted back at her.
A cool wind whispered across the clearing, and a bright light flashed before his eyes. He fell back, blinking.
"And you shall have it," whispered a voice in his mind. (68-9)

"You may not be good at making friends," whispered Parax. "But by heaven, you are second to none when it comes to making enemies." (319)

Wonderful, enthusiastic review, Becky! It's also wonderful that you enjoyed reading this even more the second time. It sounds as if the story has depth and is exceptionally well done.