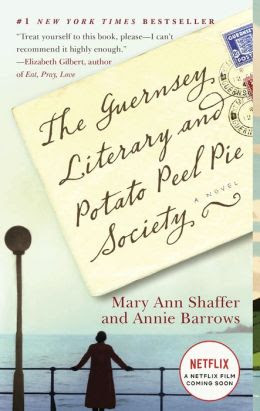 The Guernsey Literary and Potato Peel Pie Society is one of those rare, rare books where you could almost open it up to ANY page and find something to smile about. And that, of course, is something to be treasured and applauded because it makes for a completely satisfying read from start to finish. This novel is told completely through letters. Readers get to know characters in their own words, for better or worse. Readers can try to read between the lines and make connections perhaps. They might attempt to play "Miss Marple" like one of the minor characters and spy out what is really going on...

The heroine of the novel is a young author named Juliet Ashton. During the war, she wrote a regular column under the name of Izzy Bickerstaff. Now that the war is over (finally!!!), her columns have been published together in book form. She's happy. Of course she's happy. Why wouldn't she be happy. The war is over. Her book is being received positively. Sure, she feels the need to move on, to write a book under her own name, to write a very different book. And true, she's a bit in doubt as to what that next book will be and if that book will live up to the success of the first one, but...

So most of her letters are to her publisher, Sidney, or to her best friend, Sophie. But. One letter she receives changes her life. And it wasn't an obvious change-of-life letter. It was a friendly, down-to-earth letter from a complete stranger. He'd read "her" book. No, not the book she'd written. But a book that had been in her library, a book with her name and address in it. It was a book by Charles Lamb. This used book found and read during the war, really, really effected him. He connected with Charles Lamb, and he thought she might have book recommendations and such.

So. Juliet discovers almost by accident several things. First, that Guernsey was occupied during the war. (If she'd known during the war, it had slipped her mind because it didn't really impact her--not because she was selfish, but just because when your own world is a big tumbling-down uncertain mess, you don't really think of the island of Guernsey in the big-scheme-of-things.) Second, that a group had come together through desperation and lust (for a pig dinner!!!) to form the "Guernsey Literary and Potato Peel Pie Society". Though for the record, the Potato Peel Pie part came later! Of course, she HAS to know more, and she wants all the details. She NEEDS more. She wants to hear more from men and women in this "literary society." She wants their stories--about books and reading, about the Nazi occupation, about the war, about their hardships (hunger, separation from children, etc), about their joys and sorrows. Of course, all this will take time and trust...

And that is what makes this one so great, in my opinion. I loved the getting-to-know experience. I loved the relationship building. I loved seeing friendships form. I especially, especially loved the bond that formed between Juliet and Kit (a war orphan). There were so many giddy-making moments in this book!

I would definitely recommend this one! It is so wonderful, so charming, so perfect!!!!

I first reviewed this one in August 2009.

Perhaps there is some secret sort of homing instinct in books that brings them to their perfect readers. How delightful if that were true.

I love seeing the bookshops and meeting the booksellers-- booksellers really are a special breed. No one in their right mind would take up clerking in a bookstore for the salary, and no one in his right mind would want to own one-- the margin of profit is too small. So, it has to be a love of readers and reading that makes them do it-- along with first dibs on the new books.

Isola doesn't approve of small talk and believes in breaking the ice by stomping on it.


It was amazing to me then, and still is, that so many people who wander into bookshops don't really know what they're after--they only want to look around and hope to see a book that will strike their fancy. And then, being bright enough not to trust the publisher's blurb, they will ask the book clerk the three questions: (1) What is it about? (2) Have you read it? (3) Was it any good?

Will Thisbee gave me The Beginner's Cook-Book for Girl Guides. It was just the thing; the writer assumes you know nothing about cookery and writes useful hints - "When adding eggs, break the shells first.”

“What on earth did you say to Isola? She stopped in on her way to pick up Pride and Prejudice and to berate me for never telling her about Elizabeth Bennet and Mr. Darcy. Why hadn't she known there were better love stories around? Stories not riddled with ill-adjusted men, anguish, death and graveyards!”

The first rule of snooping is to come at it sideways--when you began writing me dizzy letters about Alexander, I didn't ask if you were in love with him, I asked what his favorite animal was. And your answer told me everything I needed to know about him--how many men would admit that they loved ducks?

I loved this book, too, Becky. Wonderful quotations! Perhaps I should also reread this epistolary novel.

I am hoping to reread this book this year, too. It has been too long!

It's been years since I read this. It must be nearly time for a reread for me too.

Glad to see it stands up to a re-read. I loved this one the first time I read it.