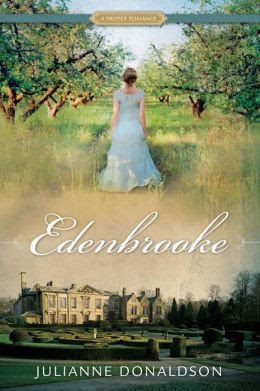 In September, I reviewed Julianne Donaldson's second novel, Blackmoore. I adored it. I absolutely LOVED, LOVED, LOVED it. I am less enthusiastic about her first novel, Edenbrooke, but I think that has more to do with the fact that I GUSHED so much about Blackmoore that my merely enjoying Edenbrooke pales in comparison.

Edenbrooke is a thoroughly satisfying Regency romance novel. If you are always on the look out for CLEAN but satisfying romance novels to read, especially if you love historical romances, then Julianne Donaldson might be a great match for you! I'd certainly recommend these two! Personally, I love finding authors that write clean romance novels. That is something I value and appreciate. I know people who are always looking for more of these types of books, so more recommendations are always welcome! Shadow Mountain, the publisher, has a line of clean romance novels published under the proper romance brand.

The heroine of Edenbrooke is Marianne. Since the death of her mother, Marianne has lived with her grandmother in Bath. Marianne doesn't exactly find Bath ideal. She'd much rather have stayed with her father, stayed in her own home. Marianne has a twin sister, Cecily, that lives elsewhere. When the novel opens, Cecily is enjoying a season in London.

The book tells of what happens when both twins, Cecily and Marianne, are invited to Edenbrooke to the home of one of their mother's friends. Marianne arrives first. But there were a few moments when Marianne doubted even that! For on her way, their coach was stopped! Stand and deliver!!! A highwayman robs Marianne of her locket, her most prized possession. Their driver was injured, Marianne and her maid are able to get help and they stop at a nearby inn. It is at the inn that she meets a fascinating stranger...

The hero of the novel is Philip, or, Sir Philip as she discovers days after her arrival. She'd assume that he was the younger son, not "the heir" her very own sister is trying to "catch."

Marianne and Philip have many scenes together; a good many of them are satisfying. Donaldson is good at dialogue at capturing the back-and-forth of developing relationships. For me, Philip isn't quite as swoon-worthy as Henry (the hero of the second novel), but I think if I'd read this one first, he might have been.

Donaldson isn't quite as good as say Georgette Heyer in terms of complete character development, but her Regency romances have potential! (Donaldson is great at developing the couple, the hero and heroine, it is only the secondary characters that feel a bit flat at times.)